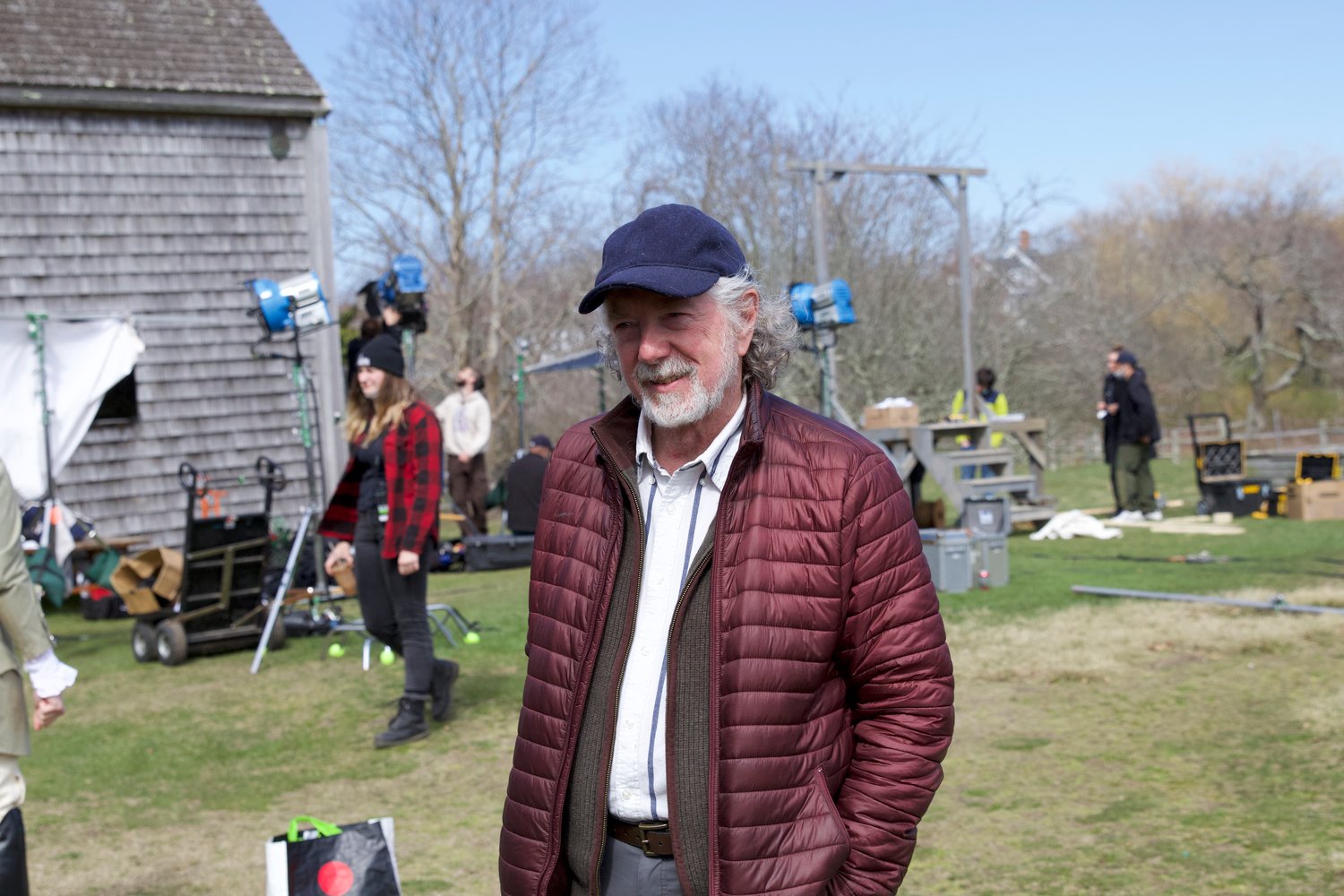 “Lost Nation,” is Craven’s 10th feature film, and his fourth on Nantucket. He admits his approach to filmmaking is unusual in the age of high-budget movies and streaming services.

At 71, however, he also said this could be his last film. Nantucket Today caught up with Craven on set to talk about the movie, the success of the program and his plans moving forward.

Q. You use a unique model of filmmaking with college students on island for a semester and a professional crew. What is it about that approach and your philosophy as a filmmaker that makes it work?

A. As a sole film director, you work with a professional crew, most of whom haven’t read the script. Maybe you develop it for a couple days with a collaborator. But in this case the dialogue with students starts two years before production and continues throughout.

My move to semester cinema concept was motivated by two things. One was my love of experiential learning, starting with a group called Circus Smirkus, where students put on over a month of performances. It’s still running, and now it feeds Cirque du Soleil. Then, teaching at Marlboro College, being a student-centered college focused on the potentials of experiential learning, my students asked me could they work on my film. And they could and they did, but the question was whether they could do more.

Q. What about non-professional actors?

A. Susan McGinnis, what she does in “Martin Eden,” is in my opinion fabulous, couldn’t be better. There’s a special pleasure to working with an actor who isn’t experienced in working with film and getting a performance that resonates. Mike Kopko as the prison guard in “Lost Nation.” He brought to it a very distinctive quality that really enlarged the character. It took him some time to get into the groove, but once he got there it was great.

Jack Bulger, courtroom judge. He’s been a featured extra before but never in a speaking part. Jack by his own admission is a community actor who plays big. It can work. If you have actors who are willing and open and flexible and courageous, we can make it work.

Q. This isn’t your first time filming on Nantucket. You were on island three years ago for “Martin Eden.” You also filmed “Disappearances” on island with Kris Kristofferson. Why do you keep coming back?

A. This welcoming spirit is something we have been able to draw upon across the board. With “Peter and John,” Charles Bartlett wrangled his buddies on boats, getting us out to Coskata Pond. Jim Lentowski, in the punishing cold winds of January, took me location scouting onto the moors, and who opened the doors to us. The list goes on and on in terms of the idea that what we do requires community support and that’s been true from day one.

Obviously Nantucket has its challenges. There’s the question of cost of living and housing, but that old New England community conectiveness is still intact today and that’s extremely important to what we’re doing.

Q. “Lost Nation” is set primarily in Vermont, and in some cases colonial Philadelphia? How can you recreate the look of 1770s Vermont mountain country on Nantucket?

A. Nantucket has the largest collection of pre-Civil War housing in the U.S. The period, location and authenticity are all extremely compelling for us. A big part of making a movie is creating a world and we find it here in the houses, outside the houses, on the streets, in the alleys, even the weathered trees and shrubbery

It’s that period authenticity that goes beyond finding properties and locations, that comes down to just the feel of the place. There is a mood and tone that has infused each of our films, even wetware, that is distinctive to Nantucket.

Now our job is to seamlessly try to meld the two places. I think we will. I think the world we create is distinctive to the movie. It’s not Nantucket as people know Nantucket.

Q. What drew you to make a movie on Ethan Allen, the Colonial-era statesman and militia leader who fought for Vermont’s statehood during the Revolutionary War?

A. I’ve been interested in Ethan Allen since the day I moved to Vermont in 1974. The more I research, the more interesting his story becomes. Adding (the Lucy Terry Prince) storyline makes it an unconventional way to approach a story with two protagonists.

We believe the story, which is so much a New England story, will be able to play to live audiences throughout New England. That’s what we believe in. Then it goes on to streaming and it has a life there, which is fine. But we want to sit with an audience because if you have a film and all it does is stream, you don’t know anything.

Q. How has filmmaking changed since you started making movies like “Where the Rivers Flow North,” and “A Stranger in the Kingdom?” in the 90s?

A. The technology has changed, for one. We started making films on 35-milimeter film. No monitors or headphones to monitor sound. The director stood by the camera to watch the scene for performance. In some ways that may have influenced how I approach filmmaking, which is about performance, which is the thing I value most.

Technology created some distance. Some directors sit in another room on a monitor listening with headphones. I’m in the room. I want to feel the dynamic of the set. That’s unusual, but it comes with the fact that when I started making movies that’s what I did.

Q. Has it also become harder to finance an independent movie?

A. The financing for us has changed a lot. My first film was a short film and we raised money through Kingdom County Productions. Next film brought in nonprofit support and investment, hold parties, sell shares for $1,000-10,000. As that was happening the world of distribution was being heavily centralized in ways that hurt indie movies, in a way that made it nearly impossible to recoup your production costs. To me it wasn’t honest to represent to investors that you could make your money back on a film. Increasingly I saw it wasn’t possible.

My goal after making “Disappearances,” which went over budget and did well but did not return its cost to investors, was that I might never do another film again. If there isn’t a sustainable financial model, then why do it? It took another six years to come up with the operational plan with northern borders, to really center the student experience. I saw then there was a sustainable model.

Q. How would you explain the difference between the independent, low-budget movies you make and the blockbuster movies that tend to dominate on the big screen at movie theaters and on streaming services?

A. I also think we’re taking a stand for cultural cinema as opposed to commercial cinema. Media is changing from the shared collective experience as film as an event that engages people in a broad experience. Everybody knew “The Godfather,” “Chinatown” and “There Will Be Blood.” Cinema has a broad impact of impacting people. That’s changing. Film is becoming a commodity to be consumed at your leisure where three people can be at lunch are all watching different things. That change will be interesting to track. It will make life more difficult for independent filmmakers.

Q. You’ve told us in previous interviews that this could be your last movie. Why stop now? And if it is the case, how would you evaluate the success of the program you created.

A. I think the program has been successful, and that’s independent of the films themselves and how well they play. I am proud of the films and I believe in the films. They have found support in the larger world, but the experience of the students can be measured too. Have people developed, grown, been transformed, deeply engaged and coalesced as a community of people that care about each other? The answer has always been affirmative on those fronts. It’s also true coming out of Covid on this film that we see a couple kids that are struggling. That is something that society as a whole needs to take a look at. Allow kids to express themselves in a world that doesn’t always show a lot of care for young people.

More colleges should take a look at what we’re doing and see it as a learning opportunity that engages professional artists and gives students an experience they wouldn’t have any other way. Collaboration like that is hard in higher education, and here we’re also sharing an experience where you commit yourself to a larger piece that you own.

A. If there are projects that come to me where someone else is producing and fundraising, I will help out. Somebody approached me about writing and directing a documentary about the decisions around the Iraq War, involving Notre Dame and University of Massachusetts. Somebody approached me about a classical music ensemble in Vermont. I made six short docs during Covid about a classical music trio going to venues around Vermont that were abandoned. There may be more projects like that.

I would like to see this project continue. We will explore that with people who have been involved with it up until now.