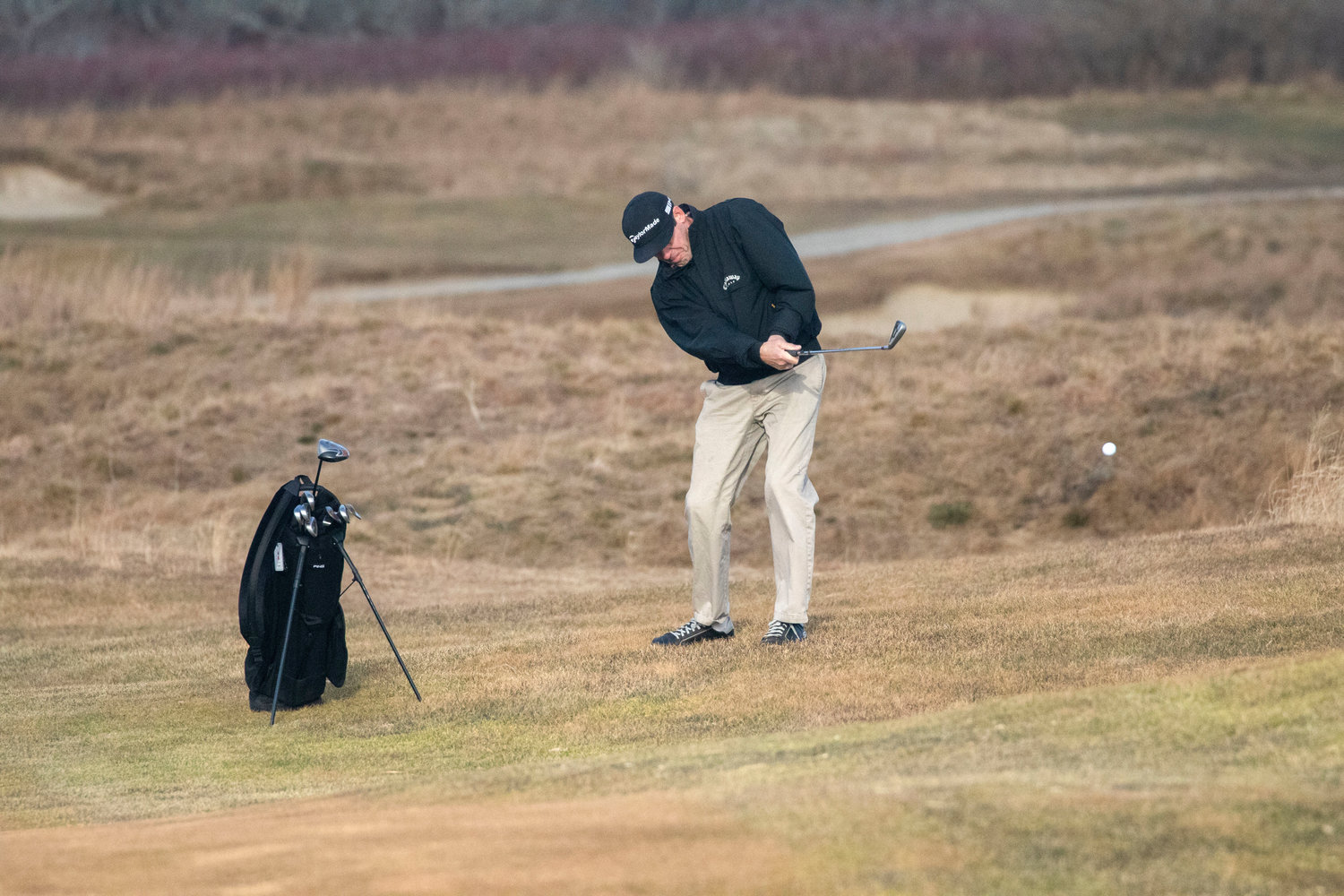 Winter golf is all about the wind. It is the first thing you check. The temperature, on the other hand, is almost irrelevant. Some of the best days I’ve had golfing in the winter on Nantucket are those days in the 30’s when the sky is clear and the winds are calm.

Even if it’s below freezing you can still play if the winds are calm. Last year there were days I golfed when the ground was frozen enough that it was almost impossible to get a tee into the ground.

Even with the weather, there is a lot to enjoy about winter golf. You often have the course nearly all to yourself. No waiting around the tee box for a slow group ahead of you. No rushing because there’s a fast group behind you.

Miacomet is the only place to play in the offseason, at least for the public. And believe it or not the course actually plays easier. Much easier. The tees get moved up, the greens get slower. And the fescue, the tall thick grass outside of the rough where thousands of errant golf balls get lost every year, thins out and dies off. In fact, the two best scores I’ve ever shot at Miacomet happened in the dead of winter. February and March.

There are downsides. First off, this is Nantucket, so the non-windy days are few and far between. The ball travels less in the winter. And it can be dreadful trying to swing a golf club in three layers of clothes and a winter jacket.

But on Nantucket, when the winter doldrums hit, it’s essential to get outside whenever you can. Honestly, golfing keeps me sane in the winter. Or at least less crazy.

Although most people play their majority of rounds in the summer, for those of us who live and work on the island, the offseason is really the time to play.

Not only is it infinitely easier to get a tee time at Miacomet, but it’s significantly cheaper as well. The prices come down as the island slows down, from a high of $200 a round in peak season to $50 in the depths of winter.

But there is a sweet spot, right before the winter, the golden season on the island to golf. From mid-September to late October.

During this time, at least through Columbus Day, both of the island’s public golf courses, Miacomet and Sconset, are open. Rates have started to fall, the crowds have dispersed and you can play a round of golf in a reasonable amount of time. The courses are still in great shape, and you can catch some of those Indian Summer days Nantucket is famous for.

Sconset Golf Course, closes on Columbus Day. The course is still called “Skinners” by locals, after its former owner Skinner Coffin. Although the course has now been owned by the Land Bank for the better part of a decade, old habits die hard. Skinners it is.

The 9-hole course has improved tremendously since the Land Bank took it over. Although only the greens get irrigated, they are in superb condition. But when we have a particularly dry summer like this year, the fairways brown up and have the give of a cart path.

I played Skinners, excuse me, Sconset, on a particularly breezy day for the last time this October. The recent rains had softened the course up and with early fall temperatures in the low 60’s the wind wasn’t much of an issue.

But Sconset is a hard course. A lot of people see it as a nine-hole par 33 and think it’s one of those pitch-and-putts. It’s not. The first four holes test your limit. The fairways are tight. If you go off track, your ball is almost certainly lost. The greens are small and now really fast.

Even though I love the course, I was happy to play my last round there and turn my sights toward Miacomet for the next seven and a half months.

The closing of Skinners coincides with Miacomet’s winter membership, which has to be one of the best golf deals on the East Coast. For $800 you can play unlimited golf at Miacomet from Columbus Day to Memorial Day.

Miacomet is a quality course. It’s won numerous awards and constantly ranks in the Top 10 in annual lists of the state's top public courses. The cost for 18 holes is $200 in the peak season. An off-season pass for $800 is a steal. Granted it is not quite the same course you’d be playing in the summer. But still. Even if you’re less avid of a golfer, you can play single rounds in the winter for $50.

One of my favorite things about the winter pass is the fact that you can get out and play four or five holes after work. With our impossibly depressing early sunsets in the winter, sometimes you just don’t have the time for nine, let alone 18 holes.

I often will leave work and just play a short loop of holes until it gets dark. And if I can’t convince anyone to play with me, playing just a few holes solo is a great way to unwind.

Don’t just take it from me. On any halfway decent day in the offseason, there are a number of winter warriors marching around Miacomet, braving the elements long after the leaves have died off, and the battle for tee times is a distant memory.