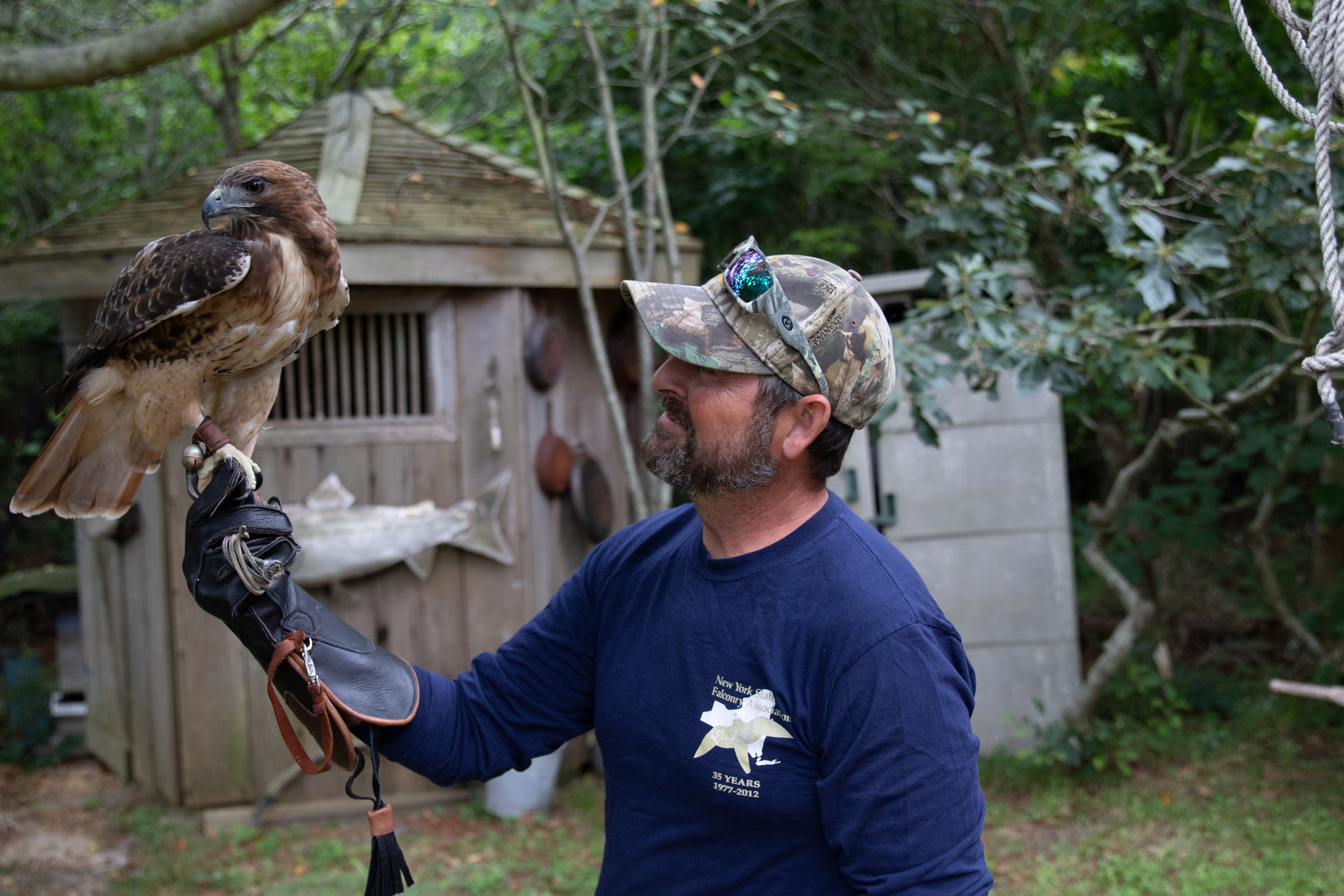 Like many friendships, it started over a meal. Chris Bonelli is a wildlife artist. There’s a kind of patient stillness about him, almost a shyness, wrapped around a bubbling enthusiasm for the natural world. He lives on Nantucket with his family. One day last year he was working in the yard, when something caught his eye.

“I could see there was something back there in the shadows, but I couldn’t quite make out what it was at first,” he said. “Then I realized it was a hawk. So, I put some food out, a bit of deer leg leftover from hunting.”

Bonelli knows hawks. He is trained to be what is known as a falconer. It’s an ancient art, using birds to hunt, the sport of kings and princes. It developed back in the mists of time, not merely ancient history, but pre-history, with its own language and traditions.

He came to Nantucket for a summer job after college, but like many others, he ended up staying.

“It was such a great place. I could go fishing, there was this great art association I could join. In the winters I’d see this guy out with a hawk,” he said. “It took some persuasion, but eventually I met Tom Mulholland and convinced him to let me come along when he was hunting with his bird and his dog. I used to go out with him. It was great. Eventually he sponsored me as his apprentice, and I got my first bird. There’s a whole process to go through to become licensed as a falconer.”

“There’s such a high mortality of the juvies, they figure you’re not impacting the population,” Bonelli said. “Young hawks starve if they don’t learn to hunt, or there’s not enough food or whatever. Red-tails are kind of mellow. They hunt from a perch. They do a lot of sitting around. And basically, you are just feeding them, helping them learn how to hunt.”

“They have food preferences. Some only eat mice, and won’t touch a squirrel. Some will specialize and just go after rabbits. Some eat a variety of foods. It depends a little on what’s around, what they can catch.”

Bonelli has had a female red-tailed hawk for the last eight years. She is named Artemis after the Greek goddess of the hunt.

“This is really Artemis II,” he said. “My first hawk died, and I didn’t want to have to explain to my son, so I let him understand that this is Artemis. The first Artemis got taken out by a window. She flew hard, head-first, into a big picture window, the reflection of the sea. She didn’t realize the glass was there, and died instantly. It was really shocking, terrible.”

Over the years he’s had many birds, rehabbing, sometimes helping wildlife officials check on various types of birds of prey. But the hawk in the back yard found him.

“I watched it come and go for a few days, but there was something odd about it. It moved strangely. It could fly, but when I got a closer look, I saw it only had one leg. It flew well, but it had a hard time balancing on the ground. It kind of hopped.”

He watched as it moved around the neighborhood, checking with his binoculars, identifying it by the single leg. He put food out for it. And he named it “Ihop.”

“Sometimes Ihop wouldn’t show up for weeks,” Bonelli said. “He was independent, surviving on his own. But he kept coming back. He was interested in my hawk, in her mews. I wondered what they thought about that – ‘he’s out there – I’m in here’ or, ‘she’s in there, I’m outside.’ They had a kind of friendship. He was a young male, she’s an older female. They would talk to each other, chatter back and forth, squeak.”

Ihop got used to the Bonelli family, looking at them through the window as they moved around inside. Sometimes, when he was hungry, he would land on the deck railing.

“I would go out and wait, avert my eyes, not look at him, to get him to trust me. I held out food, and he finally took it from my hand,” he said.

Bonelli wanted to take a look at the foot, which seemed a little swollen. He put a chair out in the yard so he could wait, motionless and quiet, for Ihop to come to the food.

“I kept still, not looking at him. Then I moved closer, but he flew away. I moved back, and just waited. I moved a little closer over about a week. Eventually I put on a glove and got my hand under him from behind. He was feeding, he couldn’t see me. I gently grabbed the one leg so I could get a look at it. The stump was fully healed and feathered over, so the injury had happened quite a while ago, when he was younger.”

On the hawk’s remaining foot he had a disease falconers know as “bumblefoot.” Bonelli consulted several vets, but they just wanted to euthanize the bird. At that point he was still hunting on his own, and he didn’t want to take Ihop out of his life in the wild. With time, holding his food became difficult, and he came to eat more frequently. Bonelli tried a few non-invasive falconers’ remedies, but in the end, all he could really do was provide food.

Eventually, Ihop succumbed, probably to bumblefoot, and didn’t return. But he had lived his life on his own terms. Who can really know what those terms are, or make choices for a

Bonelli still hunts with Artemis, going after rabbits in season. He loves the chase, trying to keep up. He doesn’t use a dog to flush the game.

“I’m the dog!” he says. “It’s a way of keeping fit, and I love it, watching her, running after her. Crashing through the bushes. It could be 10 degrees out, and I’m drenched in sweat.”

He paused a moment.

“In the beginning, the relationship, it’s all about the food.”

“But after you’ve been with a bird for years, you hunt together, you know each other. It’s not just about food. It’s more. They become your friend.”