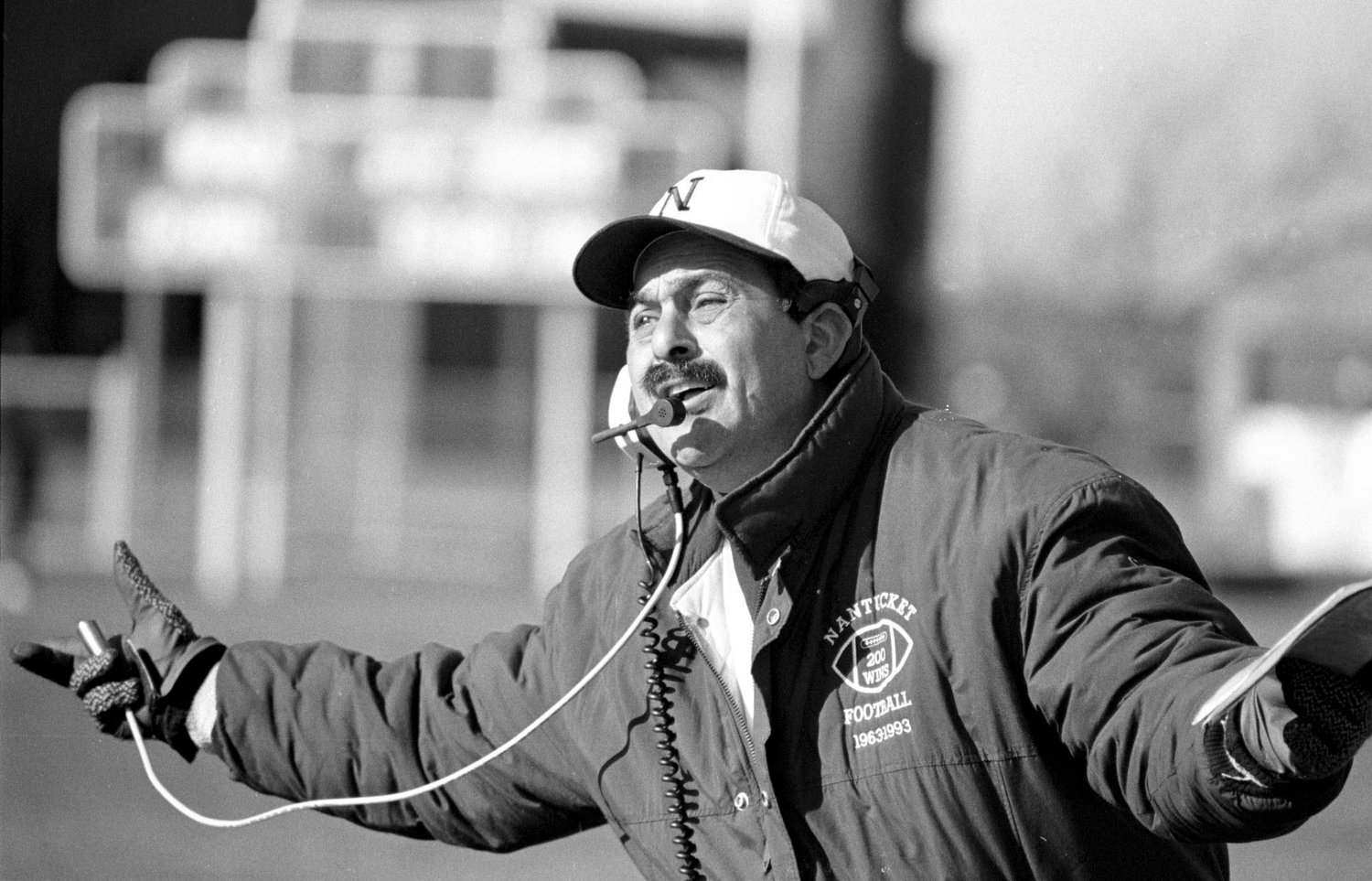 There are two moments that act as milestones in Nantucket High School football. The first is Oct. 30, 1937. Nantucket met Provincetown in the first football game since public education began on the island 110 years before.

“Football has suddenly come to the minds of the high school pupils,” read a story in The Inquirer and Mirror, two months before that inaugural game. “Through the efforts of Rev. Fred D. Bennett it has been found possible to purchase proper equipment for football players. A field on the Cyrus Peirce School grounds has been laid out and practice is about to start for a Nantucket High School football team. Under the direction of Harry Cleverly it is hoped to have a team in shape so at least two games can be played in November.”

The crowd that morning was estimated to be between 400 and 500.

“When coach Harry Cleverly sent his team out on the gridiron at 2:30 o’clock that afternoon, he was introducing eleven young men to their first football baptism,” read the newspaper’s report on the game. “Not one of the boys had ever taken part in a competitive game before in their lives and only one had seen an actual game."

That almost total lack of football knowledge, as players or fans, showed. Nantucket lost 40-0. It lost the next game 57-0, to Falmouth. That game included a trick play right out of the movie “Leatherheads.”

“The visitors worked one of the moth-eaten plays in football,” reported the newspaper. “It is known as the sleeper play. The Falmouth right halfback had not joined his mates as they lined up at the scrimmage line, but lay down on the ground at full length far across the field, where none of the local players noticed him. When the ball was snapped, it was a comparatively easy matter for him to get up on his feet, scramble across the goal line and catch a perfect pass thrown to him.”

The second milestone moment is in 1964, when a 24-year-old named Vito Capizzo moved to the island and took the job of both football coach and athletic director. He once said that the Whalers’ playbook when he arrived consisted of quarterback Dick Glidden drawing plays in the dirt. He might have been kidding, but probably not by much.

Capizzo set out to change things. Only 17 boys showed up for the first day of practice.

“The Whalers tied two games in Capizzo's first season,” according to a Sports Illustrated story. “The next year they won two. The third year, 1966, was magical. The Whalers were winning every week and by big margins. New kids were showing up for practice daily. So many fans went to away games that extra boats had to be chartered from Nantucket to the mainland.”

By the time that story was written, in 1996, the Whalers had won 10 Mayflower League championships, two state Super Bowls, and Capizzo had been inducted into the Massachusetts Football Coaches Hall of Fame. But there was something more than the winning record.

The Whalers were undefeated going into the last game of the 1966 season, but at halftime they were down 6-0 and had lost their starting quarterback to an injury.

“Capizzo glumly looked over his reserves in the locker room. There was only one quarterback left, Glen Menard, but he was in street clothes and wore a removable cast on his sprained right ankle,” according to the Sports Illustrated story.

“Menard ripped off the cast, borrowed a uniform from a reserve and took the field for the second half. He passed for two touchdowns. He also played cornerback, and in the fourth quarter he ran back an interception for another TD. The Whalers dominated Pioneer on offense and defense. Final score: Nantucket 26, Pioneer Valley 6. Final record: 8-0. The dynasty and the legend had begun.”

The story ended on the question of how long Capizzo would keep coaching. He had gout. He wanted to spend more time with his wife Barbara.  The Sports Illustrated story ended on this final note: “And though football is still king, Nantucket High School soccer became a varsity sport two years ago and is drawing players away from football.”

Capizzo retired in 2009. He died in May 2018, at 78. St. Mary Our Lady of the Isle, the little Catholic church downtown, was filled to overflowing with his former players.