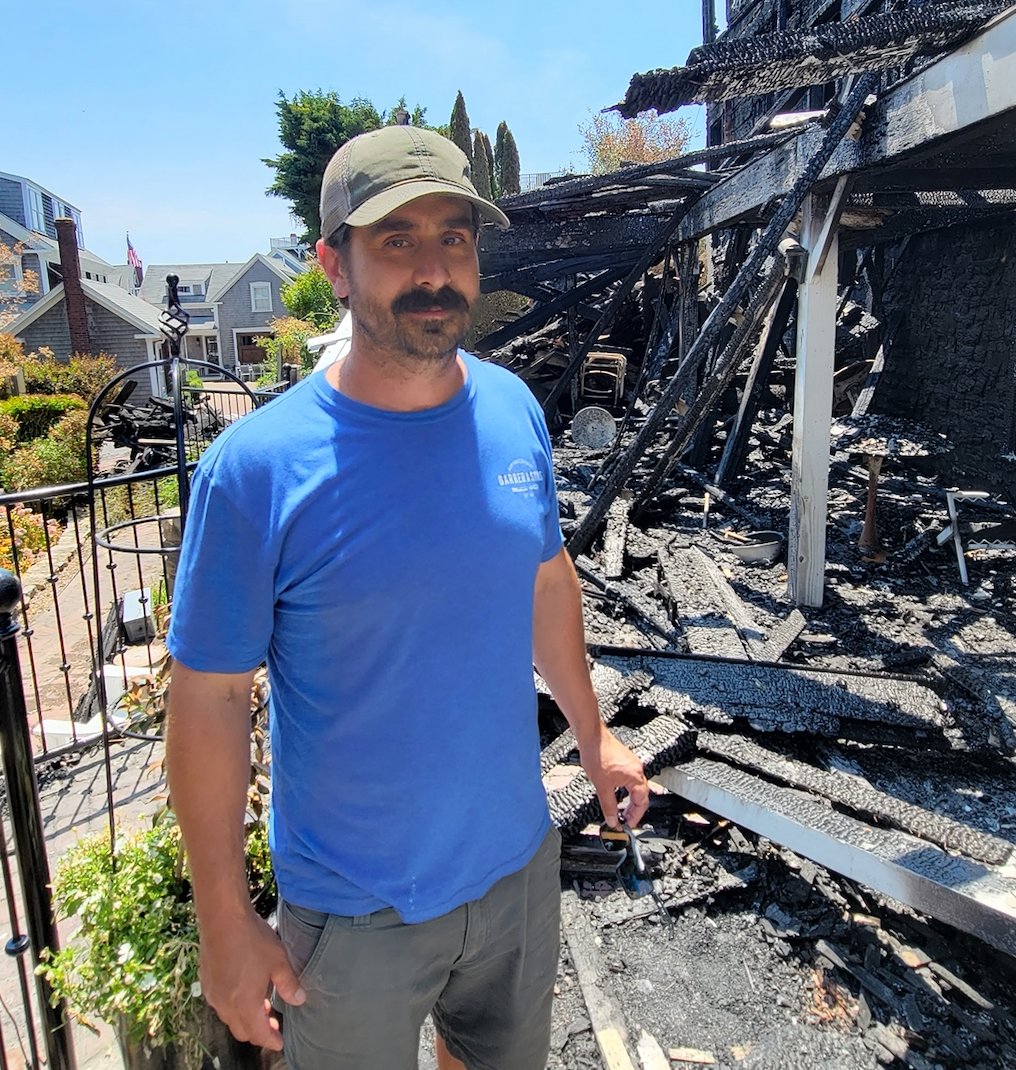 Born and raised on the island, Nate Barber is a captain in the Nantucket Fire Department and co-owner of Barber & Sons, a construction, renovation and custom-woodworking company he runs with his older brother Beau. On July 9, he was thrust into the national spotlight when the story of him running into the burning Veranda House hotel to save a pair of guests went viral.

Q. You and your brother Beau own a woodworking company and are both firefighters. What's it like working alongside your brother? The good and the bad?

A. My brother is quite a genius when it comes to woodworking, design and building. Because of that, he’s pretty easy to work with. He’s also the highest decorated firefighter in the department, so he’s got me there too.

Q. What was it like having your story (running into the burning Veranda House and getting two people out) become a national news story? Was the attention overwhelming, and has it died down now?

A. My story was just a small part of what transpired that day. The Veranda House fire was a devastating loss for some, obviously, but it was also a sizable test for the Nantucket Fire Department. We have a small department and the men and women who stood on the wall that day held their ground.

Q. You have been involved in the fight to rid firefighting gear of PFAS. What is the next big step in that battle and how do you feel about the progress made so far?

A. Deputy Fire Chief Sean Mitchell and my wife Ayesha have done almost all of the work on ridding PFAS from the gear. They have affected that industry on a national level. They’ve done it without pay and they did it for people who have job-related illness in the fire service. It’s as honorable of a cause that I can think of. They have built up a network of individuals around the country who have banded together to fight chemical companies for their reckless usage of dangerous toxins. It’s impressive and they’re a real force.

Q. Were there any comparable fires, in terms of size and scale, to the Veranda House fire during your time at the fire department?

A. It was certainly one of the biggest, but we’ve had some big ones for a small town. Marine Home Center, the Summer House, several at the landfill, and some private estates all tested us. The Summer House had similarities. I think it’s a lot to ask of a small group of firefighters to tackle these large wood structures in tight quarters. Especially when maintenance of these buildings doesn’t seem to be their biggest concern.

Q. What made you decide to become a firefighter?

A. My friend Chris Beamish started there a year before me and told me all about it. I was intrigued and started working there shortly after.

Q. Growing up on Nantucket, why did you decide to live here and raise a family here?

A. My family and friends are mostly here and I wanted to be around them. I also knew from growing up here myself, that it was a special place for a family to be.

Q. You are a former Whalers baseball coach. Do you still play baseball and have you ever thought about getting back to coaching?

A. We have added some services like ALS (advanced life support) and dispatchers since I started, but not a lot has changed really. There needs to be change though, because the department is too small. Similar towns of our size have three times the number of firefighters. It makes our job more dangerous because we feel obligated to do more and it puts us at risk. I really wish the town would help us in this aspect.

A. Beau and I have a great team of woodworkers and a fun shop to work in. We’ve been working on furniture, stairways, cabinets and custom millwork. We also build houses and do renovations. We’ve grown as we’ve found other people who share our passion for woodworking and that’s been really special for us.