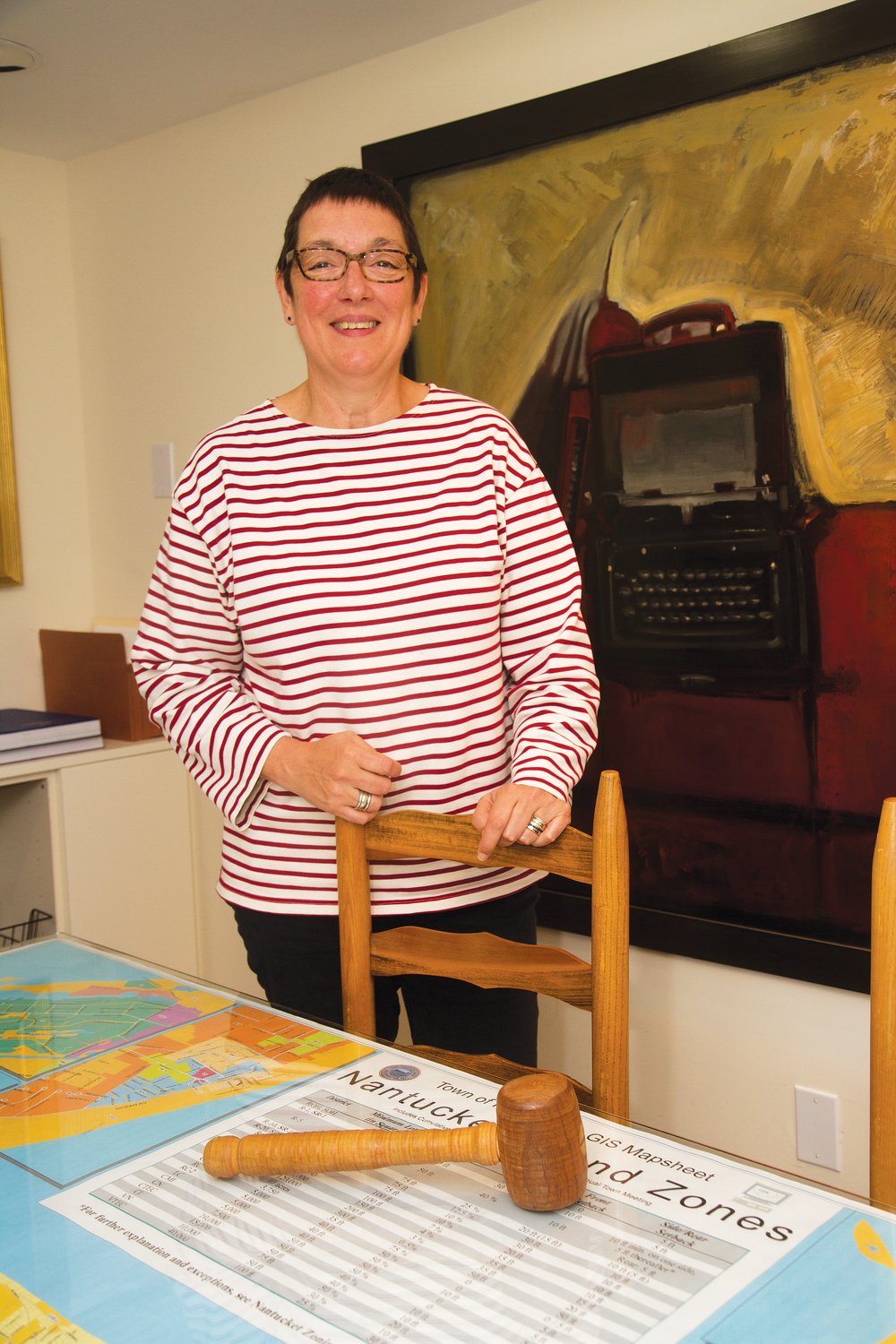 Every spring for the last 27 years, Sarah Alger has stood on a stage looking out at a sea of Nantucket voters, before she opens one of the last great forms of democracy in New England, the Annual Town Meeting. Alger, an island attorney, serves as town moderator, a position she has been elected to every year since 1997.

Q. How did you end up on Nantucket and in a law practice?

A. Near the end of law school, my then-boyfriend, who worked for the Steamship Authority, bet me that I couldn’t get a job on one of the islands. I wrote to every attorney on both islands and ended up being offered a position on Nantucket at about 20 percent of the salary that I had been offered at the firm in Boston where I had been working during school. I asked my father what he would do, and he simply recited “The Road Not Taken.” That was that. A 35-year reverse commute and many nights away from home followed for my now-husband, (retired Steamship Authority captain Bruce Malenfant), whose job started and ended in Hyannis.

Q. How long have you been moderator? What led you to decide to run for that office? Tell us about growing up the daughter of a town moderator.

A. In late 1996, I saw then-moderator Mark Arnold in the parking lot of Foood for Here and There. He told me that he was not going to run again and started going through the names of people in town who he thought might be good successors. Without any thought, I blurted out, “I could do it.” He seemed taken aback. It had never occurred to either one of us. The idea took hold. I followed through and was elected in 1997, much to my surprise and that of most of the town. I have been re-elected every year since then.

As a child, I spent a lot of time attending Barnstable’s Town Meetings with my father. I loved getting to know the stories of the voters and hearing about the issues in town. For many years, I was a timekeeper and bellringer, a job I adored and took very seriously.

Q, How have you seen Town Meeting change over the years? Why do you think attendance has dropped in recent years and what can be done to boost participation?

A. Technology has changed Town Meeting in the most significant ways over the last 27 years, from the availability of the warrant, maps and other supporting materials online, to the ability to project motions and amendments onto a screen during the meeting, to electronic voting.

I don’t have all the numbers, but the numbers I do have show that the percentage of registered voters who attend the meeting has been steady.         People are busy with their lives and may trust the more routine articles to the Town Meeting stalwarts, but as we saw with the short-term-rental article last year (the biggest turnout in recent memory), when an important issue is up for debate, people show up to be heard.

Q. Sometimes there can be contentious moments at Town Meeting between people on opposite sides of an issue. How do you deal with that and keep everything on track without the meeting getting out of control?

A. I don’t really know. I think being well-prepared and knowing who is on both sides of each issue is important. Being patient and having a sense of humor are also helpful. I think I have developed a certain amount of trust and mutual respect with the voters. Honestly, though, the people pretty much govern themselves.

Q. Last year Town Meeting was held outside under a tent. What were the particular challenges to that? As moderator, do you prefer Town Meeting in one day on a Saturday or over several evenings?

A. I liked being outside in the tent. It was a fun day. Of course, it was “June-uary,” so the biggest challenge was the weather. Like many spring days, it got cold in the afternoon as the sun went down and the wind picked up. I missed the screen for projection, but not as much as I thought I was going to.

I  really have no preference as to when the meeting is held. It is great to get it done in one day, but it is also nice to have some time to regroup and prepare for a second or third night. Scheduling is the Select Board’s purview. They set the date and time for the meeting, and I show up and run it.

Q. Any recollections of any particularly interesting Town Meetings, or moments at Town Meeting?

A. Every year there is something unexpected or interesting that happens, but mostly, I remember the people no longer with us who made Town Meeting special: Faith Oldham, Augie Ramos, Grace Grossman, Flint Ranney, Mort and Reva Schlesinger, Nancy Sevrens and Mayer Mann, to name but a few.

Q. How do you like to enjoy the island when you're not working? Any favorite places to escape off-island?

Q. The idea of Representative Town Meeting has been discussed recently. What would that look like and do you have any particular thoughts about it?

A. I do not think that we are quite ready for a representative form of Town Meeting. The logistics of breaking the island up into precincts and electing 100 or more representatives are somewhat daunting. Would areas like Sconset and Quidnet have adequate representation, or would power be completely centralized in town? At least now, if there is a particular issue of concern, a person has the opportunity to come to the meeting and be heard. Town Meeting is the last pure form of democracy, and I think we need to fight to keep it.

Q. What men and women have been role models for you over the course of your life?

A. I have always admired people who solve problems and stand up for what they think is right. Growing up, I was influenced by my father, who made me think I could do anything I put my mind to. These days, I am inspired by the people who get involved in the community, like Nantucketers who show up at Town Meeting and make a difference.