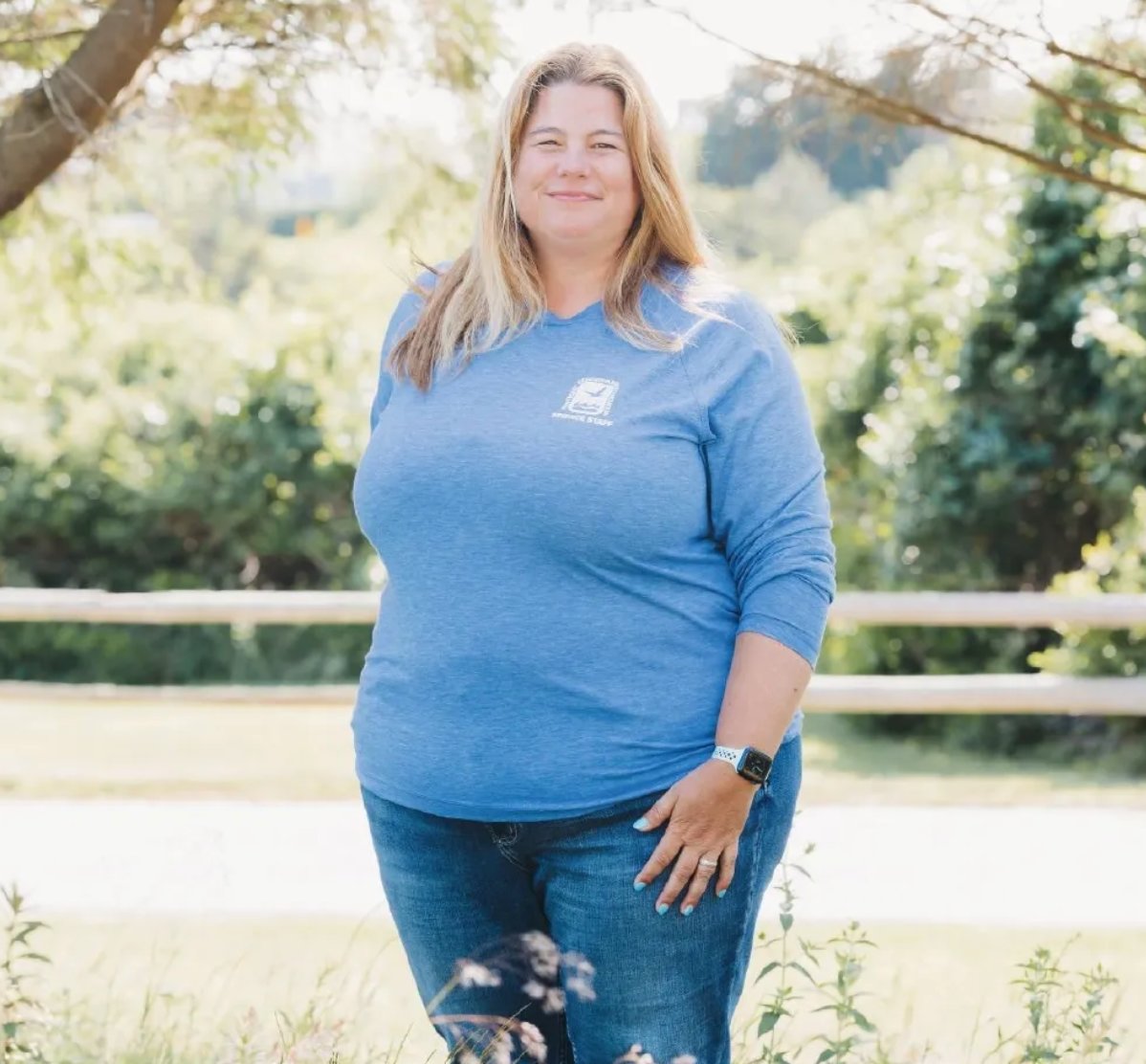 Jen Karberg, Ph.D., spent her childhood far from the ocean, in the Midwest. She studied plant science at the University of Michigan and pursued her doctorate in wetland ecology at Michigan Technological University where she focused on carnivorous plants in the state’s Upper Peninsula.

These days, as the Nantucket Conservation Foundation’s research program supervisor, she spends time in the island’s marshes and wetlands that border the Atlantic Ocean.

She sat down with Nantucket Today to talk about the island’s unique ecology and the threat of rising sea levels.

Q: Talk about your role at the Conservation Foundation. What type of science do you pursue here? What long-term benefit does it work toward?

A: The Nantucket Conservation Foundation is the largest landowner on the island. We started out purchasing land so that it wouldn't be developed. As we began purchasing all these properties and started being a major landowner, (we realized) that Nantucket has some really unique ecology. We have sandplain grasslands, which are globally rare ecosystems. They exist here, on Martha's Vineyard and Cape Cod and a little bit on Long Island, and that's about it.

Q: What is the most important underlying fact about Nantucket’s ecology?

A: Islands have unique ecology. We are an island that was covered by the glaciers and when the glaciers retreated, we were only attached to the mainland for a little while. And so we've kind of been on our own ecology-wise, since the glaciers, you know, went away, and so everything that's here has either migrated to the island or was here before sea levels rose. So, we have a mix of plants and animals and insects that are different than you would see in other places.

We’re more isolated than Martha's Vineyard. They have some animal species that we just don't have because they can't swim here. If you think of our mammal population, we have no predators on the island except for our bird predators. We don't have foxes. We don’t have wolves. We have one raccoon that came over seven or eight years ago and just won't leave. There was actually a sighting last year so we know it's still here. But our ecology, maybe it's not as diverse in some ways as other places, but it's uniquely adapted because we're on this island

Q: How has Nantucket's ecological landscape been managed throughout history and how has it changed over time?

A: We like to say that Nantucket is an anthropogenic landscape. There's not a piece of Nantucket that has never been touched by people. When the glaciers left, here was Nantucket. There were Native American populations that were already on the island then, so there is no historic never-been-influenced-by-people portion of the island. Which is really interesting.

Native Americans used the land for farming and fishing and food and living. So there's always been prescribed fire, there's always been alterations to our saltmarshes and our waterways. The Europeans actually raised sheep in our salt marshes, which you can't do today with wetland regulations. So every piece of what we have here has been influenced by people being on it, which is really interesting because it's not like that everywhere in the world.

Q: Are this island’s natural ecosystems – marshes and barrier beaches – the give-and-take between land and ocean, changing through over-development? Will they be able to be restored enough to become part of the solution to the potential of climate-change-driven rising sea levels?

A: Beaches, dune fields, saltmarshes, those are our natural resilient buffers. We actually have a lot of them, and for the most part, they're pretty healthy. We have a lot of modeling that shows us the timeframe in which they'll get impacted by sea-level rise. I think that we have the opportunity to kind of take a lot of baseline information on understanding what our saltmarshes and our dunes are doing right now. And then there's some pretty simple interventions that we can do to help make them more resilient over time. So, the possibilities exist.

But with climate change and sea-level rise and erosion, all that's happening faster than those natural ecosystems are used to responding. So we're kind of at this pinch-point where they have the ability to adapt, we just kind of have to help them . . . kind of enhance that adaptation so they can keep pace with sea-level rise. I mean, that said, we're looking at some pretty astronomical change over time. Looking all the way out to the year 2100, we're going to have to make some significant changes and actions to make sure that we still have these habitats in the future, because sea-level rise is going to be pretty significant out here.

Q: A lot of the techniques you touch on in your work – prescribed fire, rare-species inventories, sheep grazing – have applications for ecosystems all over the world. What is it about Nantucket's ecology that lends itself to this kind of study?

A: We essentially have defined boundaries to our living laboratory, and so we have a space in which we can actually measure what's influencing what's happening on the island because we know what's coming in and what's going out. We have that defined edge that's really easy to look at with the island. And that makes it a lot of fun to do ecological work on.

Q: As a scientist, do you see the island with different eyes than your average islander?

A: I think everybody sees the island through their own personal lens. I've always been a wetland ecologist, so I see everything through the lens of looking for wetlands. Where is there a bog with carnivorous plants, or where's there a saltmarsh? Or where is there a river bed or streams? So I'm always looking through that lens, or I'm always looking for the plants, because I love plants. But I also look at the island through it being a community. I think anyone you talk to will look at it through whatever their different lens is.

A: I would definitely recommend getting out to our grassland areas on the south shore of Nantucket. You can hit Sanford Farm and Ram Pasture or go over to Head of the Plains just as you're getting into Madaket. Those areas are all those sandplain grassland habitats. They're globally-rare habitats that pretty much don't exist anywhere else. They're just these beautiful rolling-meadow grasslands that end in an ocean that are pretty spectacular to get out and go for a walk in that you wouldn't have the opportunity to see anywhere else. If that's not your cup of tea, I would absolutely suggest going out to Coatue and walking, because once you get there, there's nothing like that anywhere else on the island. You have dune fields and you've got all these little saltmarshes that are tucked in the bends of the inside of Coatue and it's just kind of a really beautiful, spectacular place.

Q: How can everyday Nantucketers contribute to conservation? What does meaningful environmental stewardship look like, in an ideal world?

A: The first is learning, honestly. We have a lot of different kinds of environmental groups on the island. There's so much to learn about what's out here, paying attention to what different groups are doing and what's going on. I really think that just educating yourself about what's going on will help make people better stewards. And, of course, there's all of the good environmental things that we can do with just figuring out how to reduce our impact. Figure out what's going on and use your voice to get involved and to vote and to pay attention to town government. I mean, those are all really the best ways to be good stewards.

Q: Are there ecological elements of this island that we are in danger of losing?

A: I think that we are in danger of seeing things change. I'm not necessarily convinced that we're going to lose things because I think like I said, our coastlines are used to evolving and moving. Saltmarshes want to move inland, dunes want to roll over. We might see the loss of specific places, like the erosion that we're seeing out at Madaket Beach.

We’re seeing different plants and animals coming here that maybe haven't been here before, that are moving up from the south as our climate is changing. So we might see a shift with what that looks like. I mean, how do you say right now if that's good or bad? It's change. A hundred years from now, Nantucket very likely won't look the same way that it does now. But hopefully, if we're doing a good job, there will still be functioning ecology.