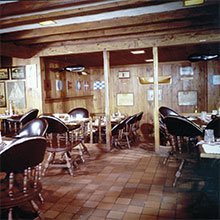 The original Tap Room, open from the early 1960s through 2004, had a cozy feel with a definite nautical theme.
Nicole Harnishfeger
Joshua H. Balling

The Tap Room was the kind of place you could feel comfortable disappearing for an afternoon, back when one of the purposes of a local watering hole was to hide patrons from the stresses of the world outside the doors of the bar.

“The bartenders had a list. When the phone rang, they’d say, ‘Oh, no, Mrs. so-and-so, I haven’t seen him today,’ and the husband would be sitting right there at the bar in front of them,” Phil Read said with a laugh.

Read owned and operated The Tap Room and the Jared Coffin House, which sits at the top of Broad Street, from 1966 until he sold it to Nantucket Island Resorts in 2004. Tucked in the basement of the historic inn, The Tap Room closed its doors in 2006.

“It was a melting pot for people,” Read said. “There were no presumptions that this was a fancy restaurant, just solid, good food. One of our key managers told us not to dress it up too much. ‘You’ll ruin it,’ he said. “We tried to give the community something they could depend upon 365 days a year. We never got snobby. We knew if we did, we weren’t going to make it.”

The pine-paneled walls were covered with whale carvings by the late Charlie Sayle and ships’ quarterboards. A pianist often provided background music in the dimly-lit subterranean space. Selectmen unofficially adjourned there after their Wednesdaynight meetings, and it was busy at lunch with attorneys after district court on Mondays.

The menu was heavy on New England seafood, but included popular standards like the French dip sandwich and Welsh rarebit, dishes not found on menus anywhere else on-island.

After sitting dormant for 14 years, the space has now been resurrected by the ownership group that ran Nantucket Prime upstairs in the J.C. House since 2014, brightened and updated to meet the demands of a 21st century clientele, but with a nod to what was there before.

“Replicate is not the right word for what we have tried to do,” said Nantucket Tap Room owner Matt Sullivan, who also ran Nantucket Prime. “I wanted to use some of the old DNA. We tried to do something with the brick and beam, but make it a little more in keeping with 2020.”

“There’s a little more light. The idea is that anyone can go in and feel comfortable, whether they are just getting off of work, with their family, or just off the beach. We want it to be welcoming and approachable.”

Once upon a time, The Tap Room filled a need for islanders. These were days when the island felt as if it was closed for the season once the tourists left. There was Cy’s Green Coffee Pot, there was The Tap Room, or you ate at home.

The Jared Coffin House – the inn, its more formal upstairs restaurant Jared’s and The Tap Room – opened in 1963 under Walter Beinecke’s Sherburne Associates. Read and his wife Peg took over the lease in 1966, and bought the inn in 1976.

“You had a fisherman in foul-weather gear sitting next to someone in a business suit at the next table. It was one of the first informal bar-restaurants open throughout the winter. It just worked. There was a magic to it,” said Read, who landed on Nantucket in 1958 to serve at the U.S. Coast Guard LORAN station in Sconset and on an 82-foot patrol boat in the harbor.

He married Peg, an island girl, in 1960, and after his stint in the Coast Guard, worked summers at the Cliffside Beach Club and the Gordon Folger Hotel (now the Nantucket Hotel) while pursuing a college degree in hospitality management.

After a couple of jobs in restaurants and hotels on the mainland, the Reads returned to Nantucket.

“When we took over in 1966, everyone was concerned whether they were still going to have their jobs. I said I wasn’t going to make any changes during that first season, and we only gradually made changes after that. Almost everyone wanted to stay on. They liked having a year-round job,” he said.

“It became obvious people enjoyed The Tap Room, the informality of it versus the formality of the upstairs dining room (Jared’s), which underwent many transformations over the years. We started expanding the menu to a full dinner menu. The bulk of the preparation was done upstairs and schlepped downstairs. It was always a little frightening with the servers carrying loaded trays of hot food down those steep steps.”

In the summer of 1963, you could get a cup of chowder for 30 cents, an open-faced scallop sandwich for $1.25 and a lobster-salad roll for $1.35. Over the next decade, menu items ranged from New England scallop pie and a petite filet with Bearnaise sauce, both for $5.25, to baked stuffed shrimp for $6.25 and Nantucket bay scallops broiled in a casserole or fried for $5.95 in 1973.

“I wrote most of the menus myself,” Read said. “They reflected my philosophy of New England food service. Then, as I brought in some newer chefs, I started to learn more about their creative, amazing cuisine, but that was explored more upstairs at Jared’s.”

The Tap Room and Jared Coffin House were a launching point for some of the island’s best-known chefs and front-of-the-house people. Alumni who went on to open their own places include The SeaGrille’s E.J. Harvey; Richard and Jeanne Diamond of A.K. Diamond’s; John and Kate O’Connor of The Atlantic Café; Café Bella Vita’s Rich and Pat Beaulieu and the Rotary Restaurant’s Elliot Norton.

All but the SeaGrille have closed their doors due to the changing nature of Nantucket’s restaurant culture.

Sheriff Jim Perelman, who went on to open the original Boarding House and was still doing barbecue-catering gigs until a year or so ago, was there in the early 1970s, first as a part-time baker, then as a chef.

“There were usually three of us cooking, alternating shifts upstairs at Jared’s and downstairs in The Tap Room,” Perelman recalled. “It was certainly active. We’d pack them in for Beef and Brew. That was a huge deal in the wintertime. There was nothing out of town in the winter, no local hangout like Faregrounds today. It was The Tap Room, Cy’s and maybe The Mad Hatter.”

Read was never upset by what at times seemed like a revolving door in the kitchen.

“We helped them, often times by making introductions that helped them move on,” he said. “We loaned them some money to

get started in their own restaurants. We just continued on. We never felt threatened by their leaving. It’s the entrepreneurial spirit. Those people who have it work well for you when they are with you, they make your business better. Money won’t keep them. That spirit isn’t about money.”

The new Tap Room opened its outdoor patio in early summer, but the inside wasn’t ready until September.

The layout is essentially the same as the original space. The room is brighter, the walls painted dark blue with white shiplap. The dark tiled floor is gone, replaced by lighter wood. There are exposed beams and back-lit art on the walls. The bar is in the same location.

The goal is to create an enduring, year-round tavern that becomes a community place, Sullivan said. “As much as people talk about the dark wood, the different elements of the old Tap Room, great restaurants and great hotels are made by the people. Hopefully we’ll build a great year-round staff who keep bringing people back,” Sullivan said.

He knows he faces a different challenge than Read did.

“When you’re the only place in town, like the old Tap Room was, even with a smaller population, that makes it easier. Now there are probably six places like that. We’ve made it so it should be a great fall, winter and early-spring place downstairs. I hope it will be,” Sullivan said.

The transition from summer patio to off-season hangout starts with the menu, he added.

“We’ve kept the two things people mention the most from the old Tap Room: the French dip and the Welsh rarebit. I call it British pizza. We’ve tried to make it pretty traditional with sharp cheddar, Whale’s Tale ale, and we make our own brioche,” Sullivan said.

“A steak at $50-$60 like we offered on the patio this summer is not going to be here in the off-season. But it’s a steak and seafood building. We’ll probably do a cod with a cracker crumb in the fall and winter.”

“I love some of the things they’ve done with the new space. There are some very nice touches. It’s a whole different world today. If they do it right, it will be popular. If they price themselves out of the picture, it’s going to be difficult,” he said.

“I’ve been here for 54 years. I’ve seen Nantucket go from cottages to castles. I miss the informal, old way. When the Boys Club and the hospital didn’t have to have big fundraisers to raise money, people would come in wearing jeans and cut-off Nantucket Reds, and drop off a nice check to see them through the winter,” he said.

“The restaurant industry has gone very high-end. I’m hoping The Tap Room will have some local appeal this winter. It will hurt them if they don’t.” ///

Joshua Balling is associate editor of Nantucket Today and managing editor of The Inquirer and Mirror, Nantucket’s newspaper since 1821. He arrived on the island in 1994, in time to spend a quiet winter afternoon or two in the original Tap Room.