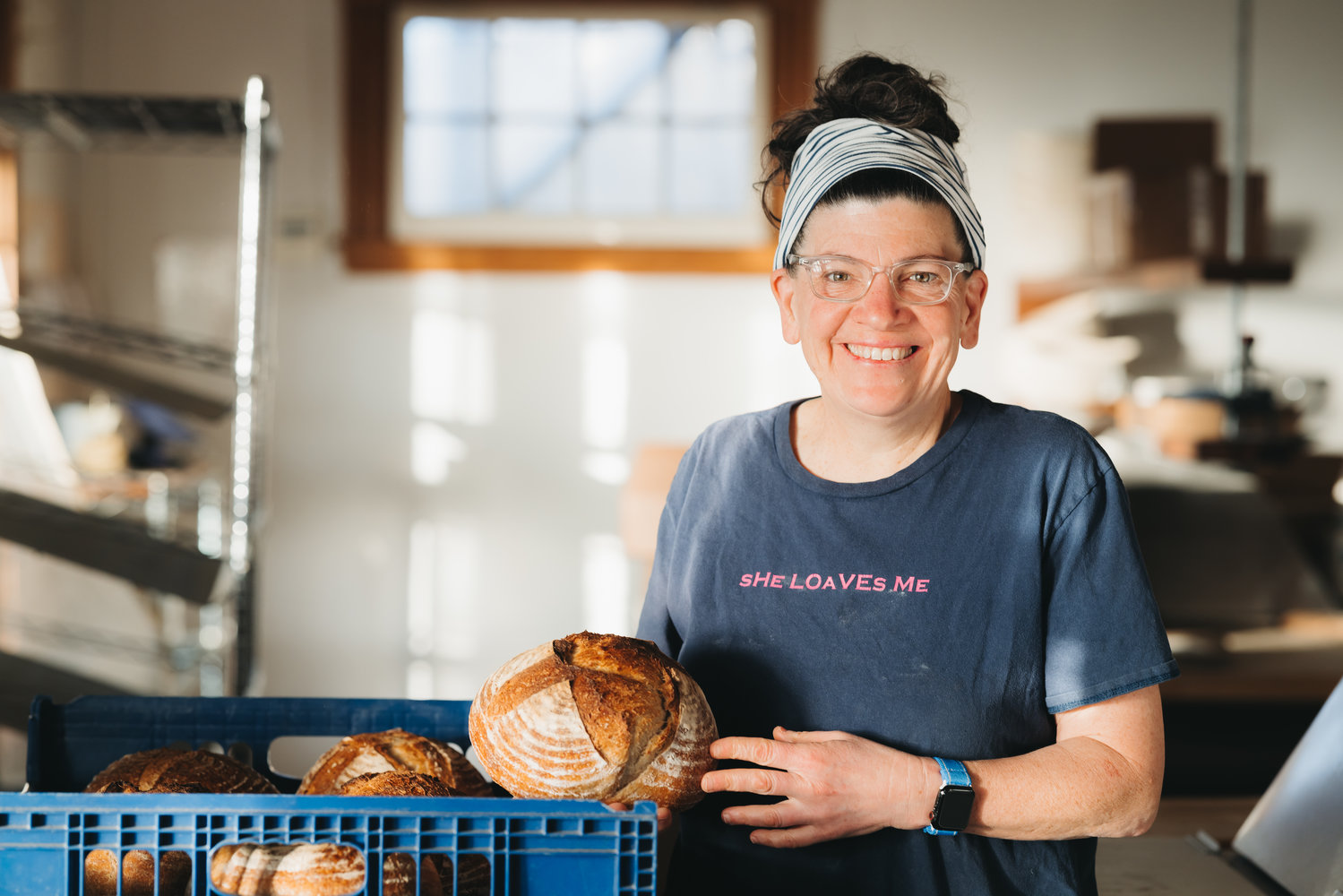 Sourdough is not your garden-variety bread. It is an artisanal craft, a science and an art, a measure of a baker’s patience with an end result that gives you something tangy and light, with a crispy crust resembling a brick-oven pizza.

It isn’t a simple recipe. It is an elaborate process of trapping yeast from the air and letting it slowly ferment in a starter.

Sheila Fee understands all of that.

Four years ago, she started experimenting with sourdough baking, selling a few loaves at her knitting store, Flock. Soon a sort of artisanal bread cult grew around it.

Fee is no newcomer when it comes to bread. Her husband, Matt Fee, owns Something Natural. She lives next to the bakery. But sourdough is not ordinary bread. It is not the Portuguese, rye or white bread her husband bakes and sells. There is something undefinable about sourdough bread that encourages people to go out of their way to buy it.

In just four years, the operation has blown up. Now she’s selling her bread, called Pink Salt Sourdough, at Stop & Shop. Marriage to a baker provided the needed oven space.

“If we didn’t have a bakery, there’s no way I would have started this. It’s consuming, but that’s what we do,” she said. “I had never really baked before. But if you teach me something, I’m like a dog, I’ll do it over and over again. If I have problems I’ll ask Matt.”

When Fee gets an idea, she tends to stick with it. Last May, she started an Instagram account for a smack-talking towny gull that holds court outside Hatch’s, called “Le-gull Advice.” Why? Because why not.

But there’s another island story here, one that goes back to the late 1800s.

Before Flock was a yarn store, it was the Nantucket Bake Shop, an icon on residential Orange Street for over 50 years, before it moved to Old South Road. Before that, it was the Liberty Bakery and Delicatessen. At one point, it was a wallpaper store. In the late 1800s and early 1900s, it was Antone Sylvia’s grocery store, which he ran for nearly 30 years until his untimely death in 1909 when he collapsed while hanging a bunch of bananas.

The building was one of five nearly identical Italianate-style markets around town. One of those markets was the Monument Square grocery store near the top of Main Street, demolished in a matter of minutes in 2001 after months of fanfare and the protest of two women who refused to step aside when the excavator came. They were arrested and released after a five-minute drive down the street, according to an issue of The Inquirer and Mirror.

Sheila and Matt Fee remember the controversy that surrounded the demolition. They also remember the one piece that remained: the ornate façade that had adorned the building for over a century, a near replica of the one that was torn off the front of the former grocery on Orange Street in the 1970s.

When they bought the Orange Street building in 2014, they launched a two-year re-construction project to put the Monument Grocery façade on the building.

“Most people would say replace it, but I like things to stay the same,” Fee said. “I like the old funky stuff. The character of Nantucket is changing too much. Something like an old, uneven window or a crack in the wall, you can’t replicate that. If you change it, it’s gone.”

It took two years to finish the project, not just the façade but a new floor and wall using repurposed floorboards, beams and windows.

“I didn't see the protests. I didn't know the history. This is the only side of the building I knew,” said Peter Fernandes, who took the lead on the project, the first historic preservation project he had undertaken. It earned a preservation award from Nantucket Preservation Trust.

“But Matt Fee really wanted (the façade) on the building, and I'm happy it worked out.”

Fee moved the yarn store from its former location at the end of Hooper Farm Road, where it was called Sheep to Shore.

It was 2004 when she started working at Sheep to Shore, just a few years after she picked up knitting. Her children were enrolled at the Nantucket Lighthouse School at the time. They were in the middle of a knitting unit at school. They brought the hobby home with them. It got Fee hooked. Before long, she was creating her own intricate patterns and making everything from socks to hats, mittens and scarves for family and friends. She couldn’t put it down.

“The real estate agent for 79 Orange called Matt and asked if he had any interest in buying the building,” she said. “I said someone is going to ruin that building and the commercial aspect as we know it is going to go.”

She made an offer. The restoration began.

Inside the store, Fee keeps the sourdough by the counter, between homemade cookies, a collection of barbecue sauces and rows of yarn and knitting supplies. Customers walk in and out. Some have knitting questions. Some want a specific kind of yarn. Others come in for bread. I came in for barbecue sauce.

“I would love to make it more the feel of a general store,” Fee said, standing under an antique wooden sign that reads, “Complete line of fresh frozen foods and vegetables.”

That message is not lost on Preservation Trust executive director Mary Bergman.

“There were five grocery stores like that,” she said. “It’s not an architectural style we see a lot of on Nantucket. Late 1860s and 1870s. Two of the stores have been altered for residential use, one was totally demolished, and the Monument Grocery store was demolished but the façade was saved.”

“It also tells the story of local food. Getting groceries would have meant going to one of five of these small stores throughout the town, rather than one big grocery store. It’s like it’s a community hub again with the yarn store there now.”

A commitment and a love affair

Making sourdough, Fee said, is like taking care of a pet. It’s a commitment and a love affair. In the winter, she feeds her sourdough starter every day with both all-purpose flour and whole-wheat flour. In the summer, when the starter is more active due to the warmer weather, she often feeds it twice a day. If she’s off-island, someone is there doing the feeding for her.

“When I go on vacation I ask Matt, ‘please will you feed the starter and water the plants.’ I went to the Berkshires for a week and took a jar of it so I could keep feeding it, and I ended up doing some baking up there, too,” she said.

“(Baking) is like working out. If you just do it a couple of times, you don’t get a feel for it. You have to just keep doing it. You get a feel for it and then you get it, that’s why you have to keep baking. Otherwise you’re left wondering why it’s crappy one day or why you got it right another.”

Once the starter is ready, Fee combines it with more flour and water to make the dough. She places it in lined baskets, called bannetons, to rest overnight. They go into the oven for about 30 minutes the next morning. From there, they’re bagged and driven to Stop & Shop and Flock.

Finding it is a matter of timing. Fee only bakes 48 loaves a day, and in the two months they’ve been at Stop & Shop, they’ve been selling out fast.

“People tell me their dream job is to own a knitting store and a bakery, and I say, just wait, have you ever done it?” she said. “It’s fun, but like any job, you have to do it when you don’t feel like it. When I first started doing it I thought it was fun, but then I started worrying, what if this tanks? What if the bread isn’t as good as what I want it to be? You can’t be hit-or-miss with sourdough, or bread in general. It can’t not work when you’re baking for a wedding.”

Four years ago, Fee was mixing the sourdough by hand. Now she uses the stand mixer at Something Natural. Finding the right mix of ingredients has been a matter of trial and error. It’s more of a formula than it is a recipe, she said. Everything is a matter of correct weight and timing.

Fee is still running Flock and has no plans to slow down either side of the operation, knitting or baking. Twenty years ago, knitting sounded like a fun idea, then she got hooked. Now it’s sourdough.

How does she eat her sourdough? Usually as a plain slice of toast.

“There’s a lot of piecemeal salvaging that’s happening around the island,” Bergman said. “But something like that with a huge architectural feature, I can’t think of another example in recent times.”