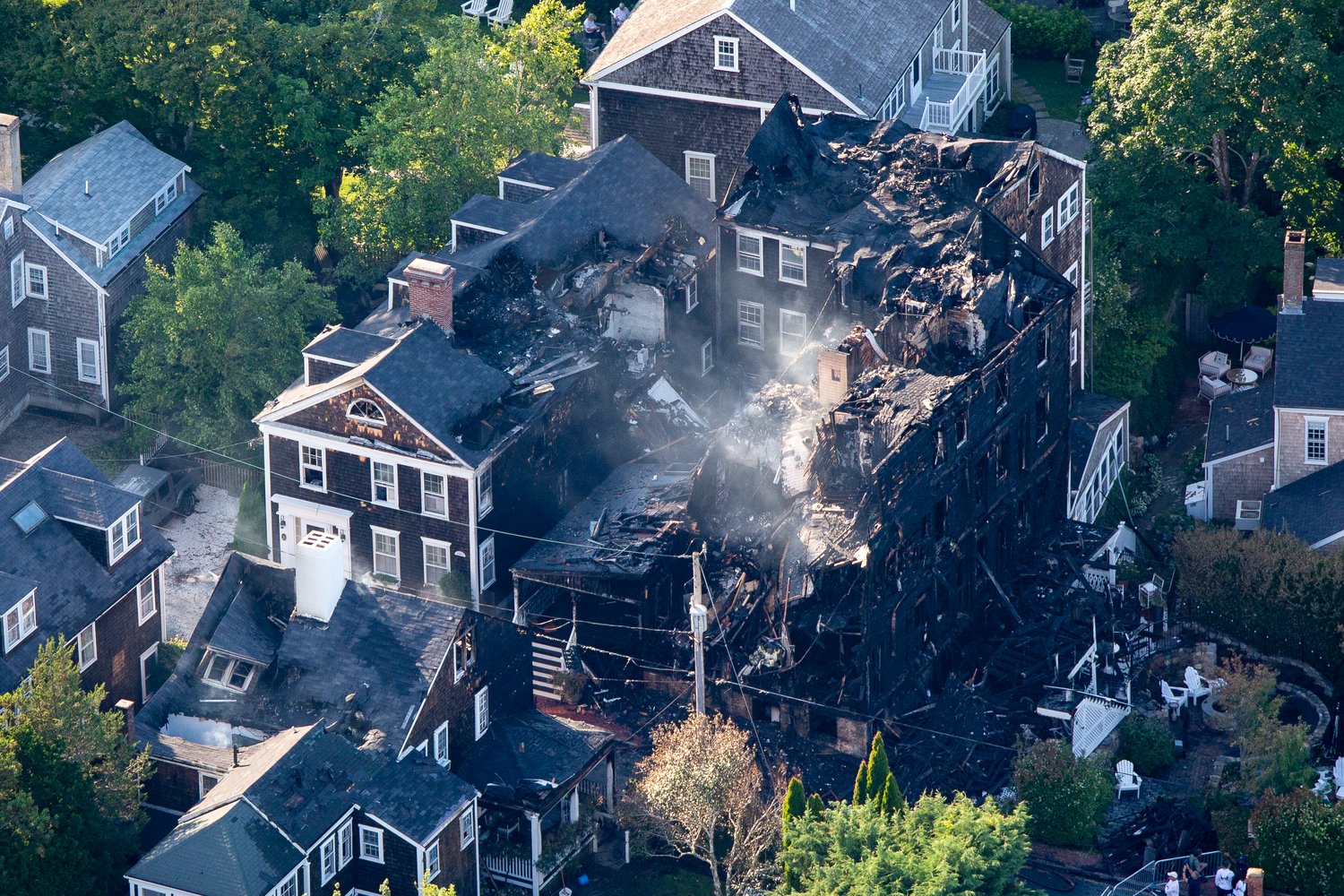 It was the wake-up call nobody ever wants to hear. Susan Renzulli’s boyfriend, Frank Harris, got her out of bed on the morning of July 9 by yelling “Fire! get out of the house.” The Veranda House hotel, next door, was engulfed in flames.

It was only getting worse. Harris still remembers how loud the roaring flames were, as they burned just feet from the house. Renzulli and Harris got out safely, but were unable to find their 12-year-old cat Chloe, who did not make it out alive.

“I went back inside to try and find her, the fire was just roaring, crackling so loud. I ran upstairs to the third floor where she normally hides and I just couldn't find her,” Harris said. “I knew if I left, she was going to die, I would never see her again. But I knew that if I didn’t leave, I might die. It was just the hardest decision I ever made, man.”

The fire soon spread beyond the Veranda House, igniting both Renzulli’s home as well as the home across the street, 4 Step Lane, owned by Kevin and Katherine Davidson.

These are year-round residents whose lives were turned upside-down in a matter of seconds. They watched helplessly as their homes burned. The fire consumed personal belongings, everything from electronics and furniture to irreplaceable items like family photos and documents.

But for all the sadness and loss the fire left in its wake, talking about the history of her house, at 5 Step Lane, still brings a smile to Renzulli’s face.

“For me it feels like a family member,” she said. “I feel a connection. The home was almost like a living, breathing thing.”

She has vowed to rebuild. In fact, shortly after the fire she visited the graves of Peter, Eliza and Joseph Brock, who lived in the house from 1850-1925, and repeated that vow to them.

“The fire had made me crazy and I’ve grieved so hard for this house,” Renzulli said. “It was probably the day after the fire. I wasn’t sleeping much then. But I made my boyfriend drop me off there so that I could tell them I will rebuild this historic house.”

Renzulli moved into the house 15 years ago, and meticulously researched the Brocks, including reading all of Eliza’s whaling journal that she wrote while on a three-year voyage. Her son is coincidentally named Joseph.

“I really, truly, feel like they’re family. Their son was named Joseph, my son is Joseph, I just feel a connection,” Renzulli said. “It feels good to talk about the house. I’ve had nothing but horror stories (in the weeks after the fire). But we’re going to rebuild it. It’s going to be restored and the historic elements that are still there, we’re going to save those and rebuild the broken parts.”

Much of the second and third floors of 5 Step Lane were damaged beyond repair. Even the areas of the home that weren’t ravaged by fire still have significant smoke and water damage from the hoses that were sprayed constantly into a window to keep the fire under control. But Renzulli is praying, literally, that the house won’t be a complete teardown and that it can be restored once again to its historic glory.

She had to wait for the Veranda House to be demolished, a process which didn’t start until more than three weeks after the fire. In the final week before the demolition, portions of the Veranda House were falling onto the east side of her house. Once the hotel is completely down, she will be able to get a full inspection done and know just how much work needs to be done.

The house at 5 Step Lane was built in 1840. The first people to live there were whaling captain Barzillai Folger, his wife Harriet and their three young children. Folger met an untimely end in Rio de Janeiro, Brazil in 1850, while on a whaling voyage. He was just 42.

Once widowed, Harriet sold the home in 1850 to Peter C. Brock, another whaling captain, his wife Eliza and their four children. In 1853, after living at home for three years, Brock came out of retirement to go back out to sea. He took his wife and their youngest son, 4-year-old Joseph, on a three-year whaling voyage, leaving Nantucket in May 1853 and returning in June 1856.

On that trip they traveled to the Azores, Cape Verde, New Zealand, the Sea of Okhotsk, Hawaii and the South Pacific. It was a difficult journey for Eliza, taking care of a young child on a whaling vessel.

“Can you imagine being on one of those stinky ships as a woman, and taking a 4-year-old on it? I can’t even imagine that. I would probably kill my husband after a few weeks,” Renzulli joked.

Eliza kept a detailed journal which became the ship’s log. In it she called herself “a wanderer upon the wide ocean, far away from friends and sweet home.”

She wrote about missing her home, her three other children, the toll of the Congregational Church bell at the top of her street, and her delight in “gamming” with other whaling wives whenever they happened upon another whaling ship in their travels.

“If it was not for hope the heart would break,” she wrote in her journal.

When Renzulli went to the Fair Street Museum to read Eliza Brock’s journal, she had to put on white gloves and read it in a climate-controlled vault.

“It was a big beautiful leather ancient thing, and you could see the drawings she made of the whales, she wrote some poetry in there,” she said.

Peter Brock died in 1878, and Eliza continued living at 5 Step Lane with her son Joseph until she died in 1899. Joseph lived there until 1925.

Known as Uncle Joe around the island, Joseph Brock was given the honor of placing the first phone call from Nantucket to the mainland after lines were connected under water in 1916.

Peter, Eliza and Joseph Brock are all buried at Old North Cemetery, their gravestones standing next to each other.

In the winter of 2006, the home at 5 Step Lane was restored and divided into two condominiums by Blue Star construction. Renzulli purchased 5A Step Lane in January 2008 with her ex-husband Roger and their son Joey.

“We found it on Thanksgiving of 2007. And it was perfect,” Renzulli said. “I loved the history. I love that part of town, the Congregational Church, so when I started looking to buy that was just my neighborhood.”

As a real estate agent herself, she had a great appreciation for the historic structure and once she bought it, she wanted the interior to reflect its history. She bought all local New England and Nantucket furnishings and housewares.

Renzulli said she has been amazed by the outpouring of support from the community after the fire. She was able to find temporary housing right away because of her co-worker Kenny Hilbig.

“He jumped right into action that morning of the fire and literally came and found me in the fire zone at my friend’s house on Centre Street,” she said. “All my friends and colleagues have been wonderful.”

“It was just generous and kind-hearted and I’m forever grateful to both,” Renzulli said.

If Renzulli is able to return the historic structure to its former splendor, which she admits is going to be a major undertaking, the fire, the helping hands from neighbors, her determination to rebuild, will all be a new chapter in its history. Perhaps in 100 years, when its new owner is sitting in the living room entertaining guests, they will talk about not just the whaling captains of the 19th century, but the woman who rebuilt the house from the ashes.