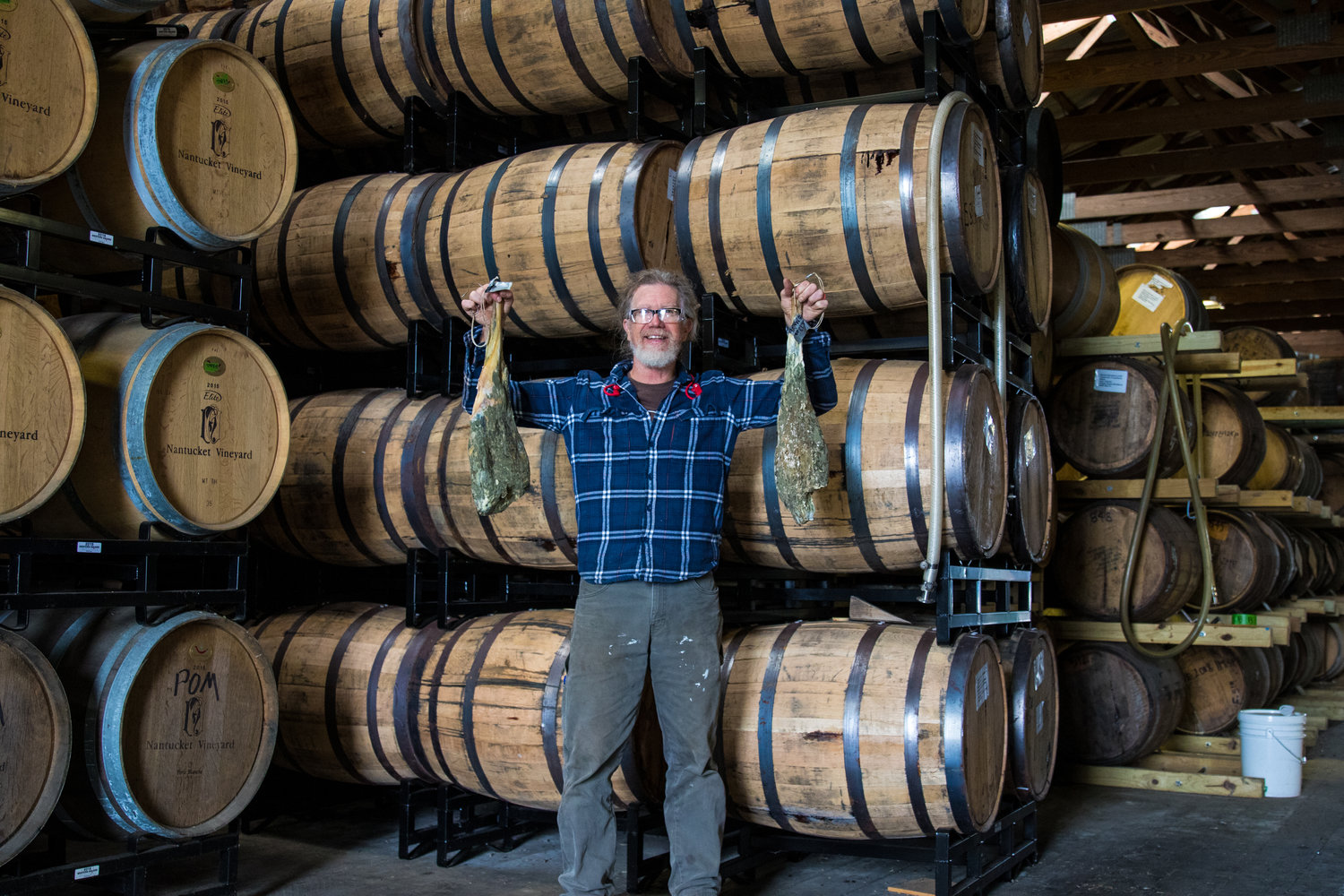 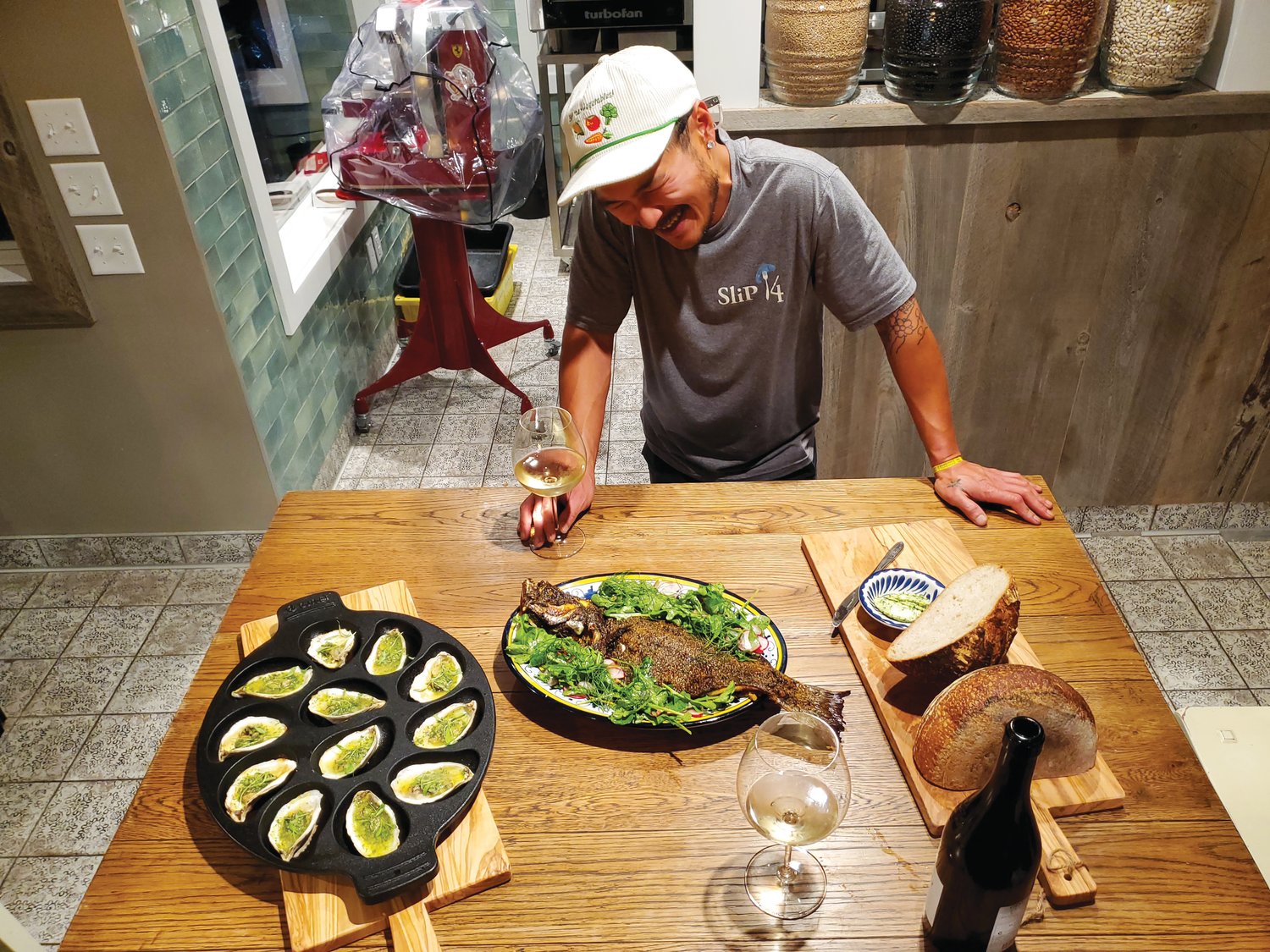 On a dirt road behind the Cisco Brewery is a big barn full of barrels of whiskey. Tucked back in the corner, in a small converted refrigerator, Randy Hudson has two venison hams curing. The night before showing the deer hams to a visitor, he was in a tree playing a game of odds during a lightning storm.  A lot of deer hunting is sitting alone in trees. For the first three years, he admits, he didn’t shoot a thing.

He uses a bow and arrow, something he feels brings him closer to the deer, both symbolically and literally.

“There is less between you and the animal. To me, I mean, it is symbolic maybe. But I feel like you are closer. You definitely need to be closer,” Hudson said.

Ever since Hudson was in college, he was interested in reducing his footprint. He realizes today it has turned into quite the buzzword, but he’s been doing it for the last thirty-five years.  In fact, he attributes the natural bounty of the island as one of the reasons he decided to stay here long term. His adventures in foraging started with blueberries and progressed to wild, edible mushrooms and fish and game.

“I was already gathering food off the landscape. And in fact, when Wendy and I first met, I wasn’t eating meat unless it was procured by myself or somebody I knew. So, if I caught the fish, or I shot the pheasant, or raked the clams, or quite literally if I found a deer hit by a car, I would eat it,” he said.

Knowing what you are looking for or where to look for it seems like a daunting task. It is something that comes with experience. Hudson doesn’t see the countless hours sitting in a tree as a waste of time. He is slowly acquiring what some hunters refer to as “woodsmanship.”

“Reading the topography and the plants in the landscape the deer are interested in. How they move at different times of the day. I didn’t have any idea about any of that stuff. I tapped a couple of guys on the island for information,” he said. Learning from people who have first-hand knowledge is crucial.

“I mean, you can read stuff in books or online now, which wasn’t the case thirty years ago. Hooking up with somebody who has been around, who has done a little bit of it, it is really that knowledge of the land that has to be sort of passed along. You need to seek it out with people who are interested or informed.”

Hunting and foraging make him feel more connected to his environment. In a broader sense, it’s knowing where stuff comes from that is satisfying to him. The mere fact he can get lettuce from Bartlett’s or tomatoes from the farmstand off Hummock Pond Road is just as satisfying to him as if he were to find a patch of blueberries and fill a bucket.

Before he could take down a deer, he used to make his family beef Wellington on Christmas Day. About seven years ago, Randy began cooking venison Wellington instead. The dish is a culmination of the year’s bounty. He saves the tenderloin, a prized cut of the deer that most hunters cook up right away, and he uses foraged mushrooms for the duxelles.

“I have a favorite. But if I can find anything to put away in the freezer or dry that can be used later, I will do that. I have some three-year-old dried porcinis I will probably have to end up using this year, because I couldn’t find black trumpets this fall,” he said. “I’ve got like three or four tablespoons of black trumpets left in the freezer. Which is a sad, sad thing. But that, will actually be enough to go along with the porcini to make something with a little of that special flavor.”

Beyond the fact that he truly enjoys spending time in nature, he feels a responsibility to share his knowledge with his children. He wants to provide a backstory, so they understand what goes into a package of meat at the grocery store.

Preserving what he gathered is also important, whether it is freezing or drying mushrooms for the future or curing a leg of venison. The two hams in the big barn have been ageing since the first week of January. Before he built his drying chamber, he started his curing process in the shower of his guest house. Now he refers to everything he cures as “shower meat.” When I asked him how his wife, Wendy, felt about that he laughed.

“She doesn’t dig that. It is the guest house, so she doesn’t have to see it. But I don’t think she digs the name ‘shower meat’ either,” he said.

When he cures the meat, he lets nature do its thing. He explained to me that the flavors aren’t necessarily from the animal, but rather from the ambient bacteria that breaks down the meat and preserves it. The longer the ham ages, the better it will taste.

“Once you get down below a certain percentage of moisture, then you are into a safe zone for bacteria,” he said. “These whole muscle groups, like a ham, there is nothing inside them that is toxic. There is nothing in the meat that is going to inherently make you ill and cause you distress. So having it dry slowly, basically from the inside out, is key.”

This Christmas while he is preparing his venison Wellington, he will crack into one of the hams, and perhaps make a little charcuterie board. When I asked him what he would drink with the meal he smiled and quickly replied, “whiskey.” He might even pour himself a dram of his prized Notch.

Meanwhile, afterhours in a commercial kitchen, Edmar Piano butterflies a fluke. It is something he has done with other fish like black bass, but this is his first time doing it with a flat-fish. He uses a technique he first saw down in Mexico and put to use while working for Mayumi Hattori at The Club Car. Now on a cold October night, he repeats the process in the kitchen at her new venture, Pip & Anchor.

He has always felt an obligation to feed his neighborhood. As a kid, food was central to celebrations and family gatherings.

“Growing up in Hawaii was always like that. The aloha. The whole block ate. If you had a house party and you had leftovers, you would make to-go platters for your neighbors,” he said. “I think that’s what hit a certain note, like this is what it should be like.”

He brought that ethos with him when he moved to Los Angeles. Recalling a time when he worked on commercial fishing boats. After he got home from a fishing trip, he would have a cooler full of fish already cleaned and vacuum sealed in cryo-vac.

“I was the fish guy. Every time I would go back to the block or hood, people would see me and they would ask me for fish. I love feeding people. And if I have an excess of stuff, I’ll give it away. I enjoy that so much. Spreading food to friends and the community. Being here too, the whole theme of Pip, I take so much pride in that. Feeding people and getting people into the whole local scene. Things like the ‘send-it boxes’ we build for the nourishing of Nantucket. That is very humbling.”

He remembers when he was a cook at Straight Wharf Restaurant. Cooking family meal was a point of pride. It is a task cooks across the board tend to see as an annoyance. But he remembers getting excited to show his coworkers what he refers to as “the spread.” Walking them down the line to explain to them what he cooked for family meal. He stresses that you can have an informal meal, but it’s important to have a good spread.

The spread tonight is a whole roasted local fluke, butterflied with the spine and pin bones removed, marinaded in a Lebanese blend called hawaij. He said that he loves to use this blend on everything. It contains turmeric, parsley, coriander, cardamom, cloves, olive oil, salt and pepper. The dish was simple and straight forward, but the flavors were complex. The fish was stuffed with parsley and slices of lemon and roasted at 450 degrees for about ten to twelve minutes.

To accompany the fish, I prepared roasted local oysters. Each oyster got a generous dollop of snail butter before going into the oven. The moniker ‘snail butter’ can be misleading. It does not contain snails, but rather shallots, garlic, parsley, almonds, nutmeg, salt and pepper. The recipe, from famed French chef Paul Bocuse, is used when cooking escargot. Some fresh sourdough and French white wine rounded out the meal.

There is something special about digging into a whole roasted fish with friends and family. Some of the benefits of cooking a whole fish are things like the cheeks and the collar. The tender meat on the back of the tail was also a surprise.

The aromatics in the marinade filled the air. The fish was served with a spoon and a fork, but in all honesty, we ate with our hands using bits of fresh sourdough as a vehicle for the fish.

“Everyone always tells me, Ed do you ever relax?” he said with a laugh as he scooped out the cheek of the roasted fluke and passed it to me. From what I have seen, the safe bet is no.

This holiday season is a good chance to see the connection between the island and your table. Try to source your ingredients from local purveyors, farms and fisherman. Get out on the water or a little lost in the woods and connect with your surroundings.