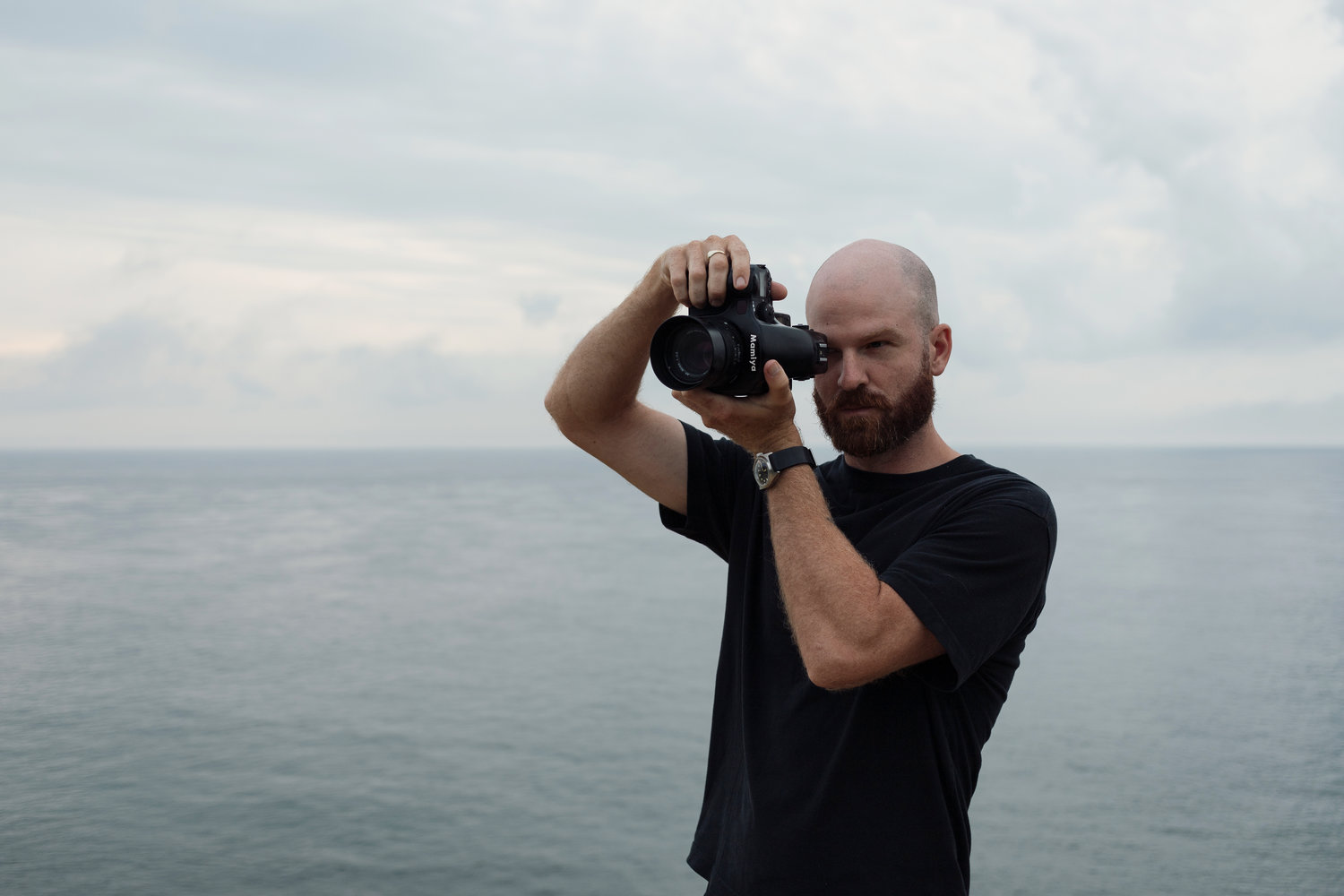 In 1895 when the Lumière brothers introduced the world to cinematography, the audience in Paris was speechless. They were simple scenes of everyday life, but to the viewers they were magical. In today’s world of cell-phone cameras that magic has been lost. People live their lives in 30- second clips on social-media platforms, often staring at their own reflection on their smart-phone screens like giant cockatoos.

Riley Wynn is a still photographer, not a cinematographer, but his photographs explore what is simmering beneath the surface of everyday life on Nantucket. Where some see social-media platforms as an online community and space to share, snapshots, he rejects that model.

“The toxic positivity of like, praying-hands emoji, ‘great image, awesome, fire bro!’ That doesn’t say anything. It is a very shallow way of interacting with art. And we are all guilty of it,” he said.

Wynn first picked up a camera toward the end of his time at Nantucket High School, but he didn’t dive into it until he moved off-island and was living in Medford, Mass. It was a time in his life with a lot of uncertainty. He was unemployed and most of his childhood friends were off having adventures. Photography was a way for him to explore his new surroundings and possibly find his tribe.

“I guess to be honest I wasn’t finding my rhythm,” he said. “I had some friends who went on this big crazy trip to New Zealand, and I felt super left out. Going out and making photos and engaging with people online felt like I was building this little community I was missing.”

He now says that looking for a community via Instagram was a bad idea. Instagram has a model where viewers are most engaged with something that quickly grabs their eye, he said, like a really beautiful travel scene. So, when he moved back to Nantucket he played into Instagram’s hand and started taking pictures of beautiful pastoral landscapes.

He was making the work he thought people wanted instead of creating images that spoke to him. It is a trap that many artists fall into.

The course was eye-opening. It made him understand the importance of the history of landscape photography as well as the history of the landscape itself. It also gave way to an interest in what is called new topographics, a theme made popular by a group of artists in the 1970s, including one of Wynn’s favorites, Robert Adams. It is the examination of man’s hand in altering the landscape.

Wynn feels an almost obsessive-compulsive need to make work. Last year during the pandemic he took a photo every day. It was a way to stay consistent, but also a way to channel stress and anxiety. His current work is focused on exploring the dynamics of power and what he calls the “absurdity of the hyper manicured nature of the island.”

As a gardener for a private residence, he experiences it firsthand. As someone who was born and raised here, and wants to spend his life here, it is important to delve into the deeper issues.

It is easy to just call Nantucket your “happy place,” and not think about the health of the harbor or the absurd real-estate market. But, Wynn said, it is hard to be blissful and ignorant when you live here all 12 months of the year. He thinks the things being done to the landscape may seem pretty and tidy on the surface, but underneath is a roiling pit, and it seems like we are ignoring the present moment. He cites the number of unattended deaths in the offseason, drug and alcohol addiction, problems with PFAS and unsafe drinking water, and rising sea levels, to name a few.

“Everybody who has stayed here knows Nantucket is beautiful, but a huge portion of what life is like here is brushed aside or not talked about, ignored to some great extent,” he said. “Everyone can feel it. It’s just simmering. The housing market is crazy. June traffic is like August traffic now. Nantucket is this weird hyper-dense model of America. There are people who work five jobs and people who have never worked one.”

Wynn has found his voice and more recently he has found an online community to share his work with and get a more genuine critique. The absence of a young art scene on-island has made it difficult for him to find his people, but he has a few like-minded artists here that he can share his work with.

He believes that to make art worth spending time with you have to push yourself and if you keep getting positive reinforcement without anyone challenging you, your art will become stunted.

“If they have your best interests and respect you and you have that foundation, all of what you exchange is in the pursuit of growth,” he said.

Wynn has a clear idea of where his work is headed. He plans to create several different narrative series, a direction he has taken the first few steps toward. It is something he hadn’t thought about before. He knows this isn’t something that will happen overnight.

Right now he is in the idea-collecting phase. The goal is to add as many layers as he can. He doesn’t want his work to be what he calls a “single serving.” A good piece of art is something you can revisit and take something new away each time. He isn’t sure if there is a market for his work right now, but he is confident there will be.

“As much as there are frustrating aspects of the island there is no place I’d rather be,” he said. “My family is here, my wife and now my son. We are the next generation. We have to make it work. Our parents had a completely different experience. I feel like, now it is in our hands to take that torch and make Nantucket the way we want. What we want to see.”