History Insider: Up, Up and Away 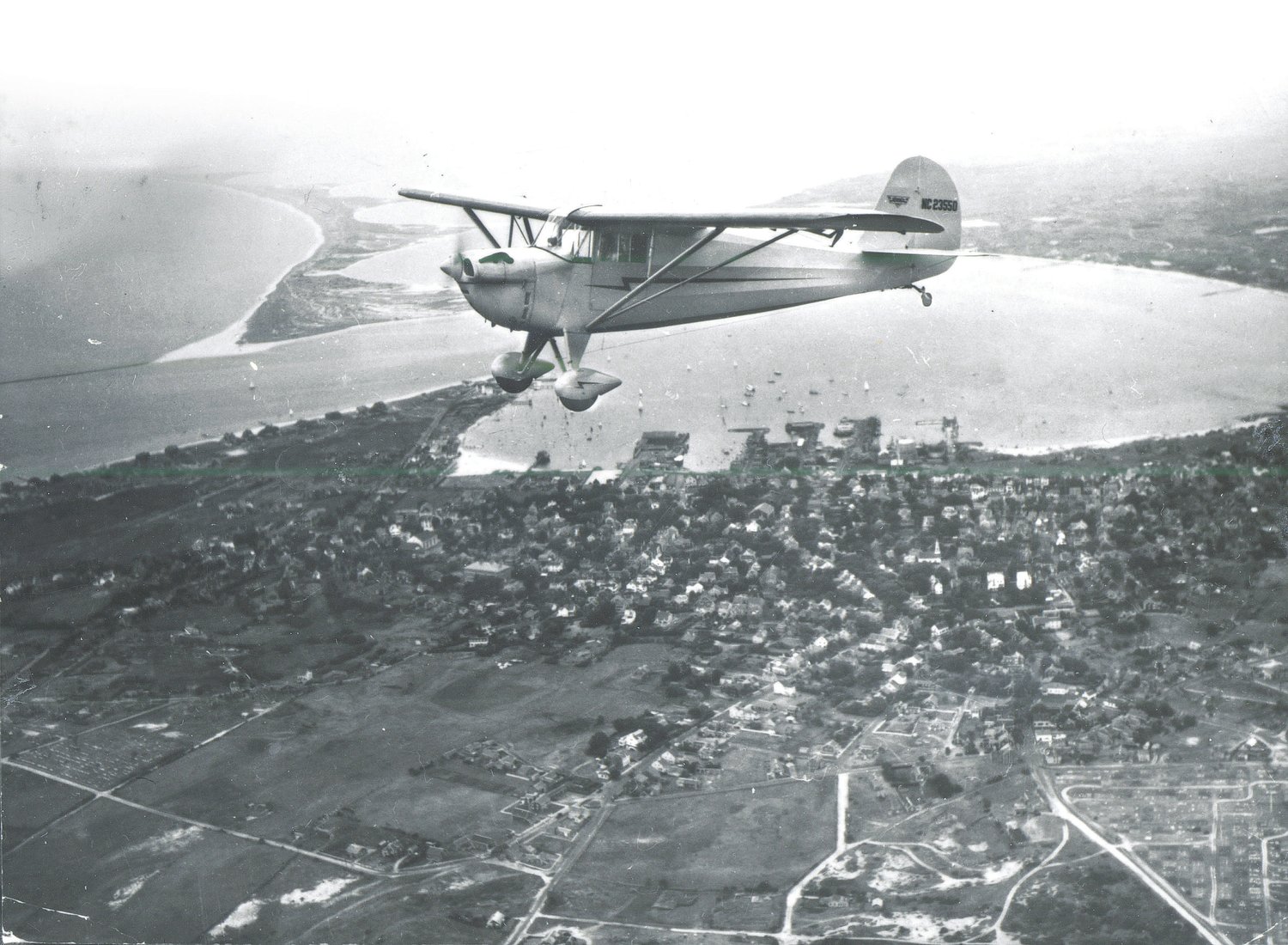 She remembered gliding silently through the clouds, banking slowly, then flying out of the them and heading toward the ground again. Mostly she remembered the connection between the sky and the old open-cockpit biplane.

“It was such a wonderful sensation,” she said. “I felt so free. No cares. No anything.”

Louise McGarvey was 96 years old in 1992, when she sat for an interview about the early days of flight on Nantucket.

“(The runway was a) hay field. It wasn’t anything but a hayfield,” she said. “And when Tommy and Dave used to fly they used to mow a swath down there to take off from the swath. Their office was the bottom of an old school bus. Les Holmes owned the field.”

Tommy Gibson and David Raub were part of a small group of island pilots in the early 1920s. In a story in the spring 1992 issue of Historic Nantucket, former Naval aviator John Lacouture wrote that, “In the late twenties and early thirties, before scrub oaks and brush covered much of the island, there were many level grass fields and pastures that made ideal landing areas for small private and passenger planes that did not require long runways.”

In 1932, according to Historic Nantucket, Gibson, Raub and Holmes mowed two landing strips, bought several old planes, including the biplane McGarvey rode in, and the Nobadeer Flying Service was born.

“I used to fly with the boys whenever I got the chance,” McGarvey said. “It was an old OSX water-cooled engine. I flew in the front and Dave flew from the back.”

She remembered cranking the dynamo to turn on the lights when they wanted to land at night.

Sometimes Raub and Gibson would do acrobatic maneuvers, falling leaves and figure eights, while McGarvey was in the passenger seat. She would signal them to head back to the ground if she was feeling sick, but she said that she always went back up.

Raub was a test pilot from Long Island, who had moved to Nantucket to take care of his mother. He died in a test-flight crash of a P-38 during World War II.

Nobadeer Flying Service was not the only one on the island. According to Historic Nantucket, “Allen Holdgate had a little field (in Sconset), where he had a small hangar, just west of Lindberg Avenue . . . There was an airstrip on Hummock Pond Road, another at Miacomet Road just before the golf course, and one just south of Sankaty Golf Course.”

The first planes to appear on the Nantucket horizon were seaplanes. Lacouture wrote that the Navy built a series of coastal stations to counter the German submarine threat during World War I. One of those naval stations was on Chatham. The seaplanes were rigged with machine guns, had the capacity to carry small bombs, and instead of a radio always carried homing pigeons to send messages.

How unusual was it to see an airplane? On April 13, 1918, the first one landed just off Commercial Wharf without warning. Four days later another one landed, but notice was sent to Nantucket that it would be arriving. School kids were let out of class to see it.

“Seaplanes have been making early morning visits to Nantucket this week, some of them coming over almost at daybreak,” read a column in the Oct. 19 issue of The Inquirer and Mirror called “Seen and Heard.” “The hum of their motors is so familiar to Nantucketers now that it is difficult for some folks to distinguish the sound of the fliers from that of motor-boats.”

You could buy a ticket for $5 to take a 15-minute ride over the island in one of them.

In May 1927, the first flights between Nantucket and Boston were announced, flying out of Tom Nevers Field. The idea had at least one island newspaper writer overjoyed.

“What a revelation it will be! What a great change from the old sloops and schooners which supplied the passenger service to and from the island before the days of steamboats,” wrote a newspaper called the Madaket Free Press. “What transformation since the days when the little steamer Eagle made the first trip across the sound in 1818!”

Later that month representatives from the Boston Airport Corporation arrived on island to locate and lay out landing strips. They flew down, with a cameraman from Pathé News on board. A newsreel of his aerial footage was shown to movie audiences the same week.

The island audience did not want to wait to see the newsreel. They wanted to see the plane land first-hand. The only problem was people were unsure of where that landing would be.

“A large crowd gathered out on the Sconset Road near the golf course, it being understood that the landing would be made in that vicinity, owing to the fact that the Tom Nevers tract had not yet been cleared,” according to a story in The Inquirer and Mirror. “About 60 automobiles were lined up on either side of the road, while their occupants strolled about in the warmth of the sun, inspected the Sconset pumping station, and picked wild-flowers growing by the roadside.”

Soon the plane appeared. “It sailed over Tom Nevers Head, circled around over Phillips Run, skimmed over Bloomingdale, then headed out of Sconset as far as Sankaty, “the story continued. “Each time the crowd thought it would make a landing either on the golf links or in Levi’s Pasture. It didn’t. It landed in the corner of the cornfield near Nobadeer Farm, where the level tract of unbroken land offered an excellent opportunity for a safe and convenient landing.”

The trip from Nantucket to Boston took an hour and five minutes. Not everybody was excited about the advent of commercial flight on and off the island.

The Worcester Telegram asked, “What has come over the spirit of Nantucket? For long it held so tenaciously to the old ways of the old days that it would not allow an automobile on the island and illuminated the Captain’s Room with whale-oil lights. Now 1927 finds it arranging for daily air-plane service which will whisk passengers over from Boston in an hour, a trip that used to take half a day. The charm of Nantucket is its tranquility and here it goes bidding for imitation Lindberghs.”

Islanders were unmoved by any criticism from the mainland. The first scheduled passenger flight from Boston to Nantucket was in a Stetson-Detroiter plane. It was turned back three times because of fog. It finally made it all the way to the island on the fourth try. On board were a state representative, a selectman and the editor of the newspaper.

It is difficult to imagine today what a thrilling and new experience it was to see the world through the window of a small airplane.

“We looked and saw one of the wonders of nature that no man can describe,” according to a story in The Inquirer and Mirror about one of the flights that had to turn back to Boston. “The sun was setting below the edge of the fog-bank in the distance, and what a sight it was! The edge of the fog, the hills, he plains, the valley, were lined with gold. No artist could paint such a picture. No camera lens could grasp it. It was simply beyond description, so we will not try.”

On the fourth try, as the island came into view, the editor wrote, “The bottom of the ocean and especially the shoals could be seen by the eye clearly. Dry Shoal, Smith’s Point, Eel Point, the familiar places began showing up one by one, And ahead was the good old town in all its glory. We skirted the north shore and then soared over the familiar streets and buildings, the churches, the streets, the square with its elms, the harbor, the wharves, and now we were heading for the landing field recently laid out.”

In 1938 air mail between the island and the mainland began. Parker Gray, who had started Mayflower Airlines, and Raub flew 1,091 pieces of mail.

In 1941 the town purchased Nobadeer Airport for $7,600. The field consisted of two sod runways, which operated only during the day. Don Allen ran it, as well as the service and repair shop, according to Historic Nantucket.

The next year the Navy began construction on the airport, which they had leased from the town. It was renamed the Naval Auxiliary Air Facility on Aug 6, 1943. The field was used for weapons training. It was returned to the town after World War II ended.