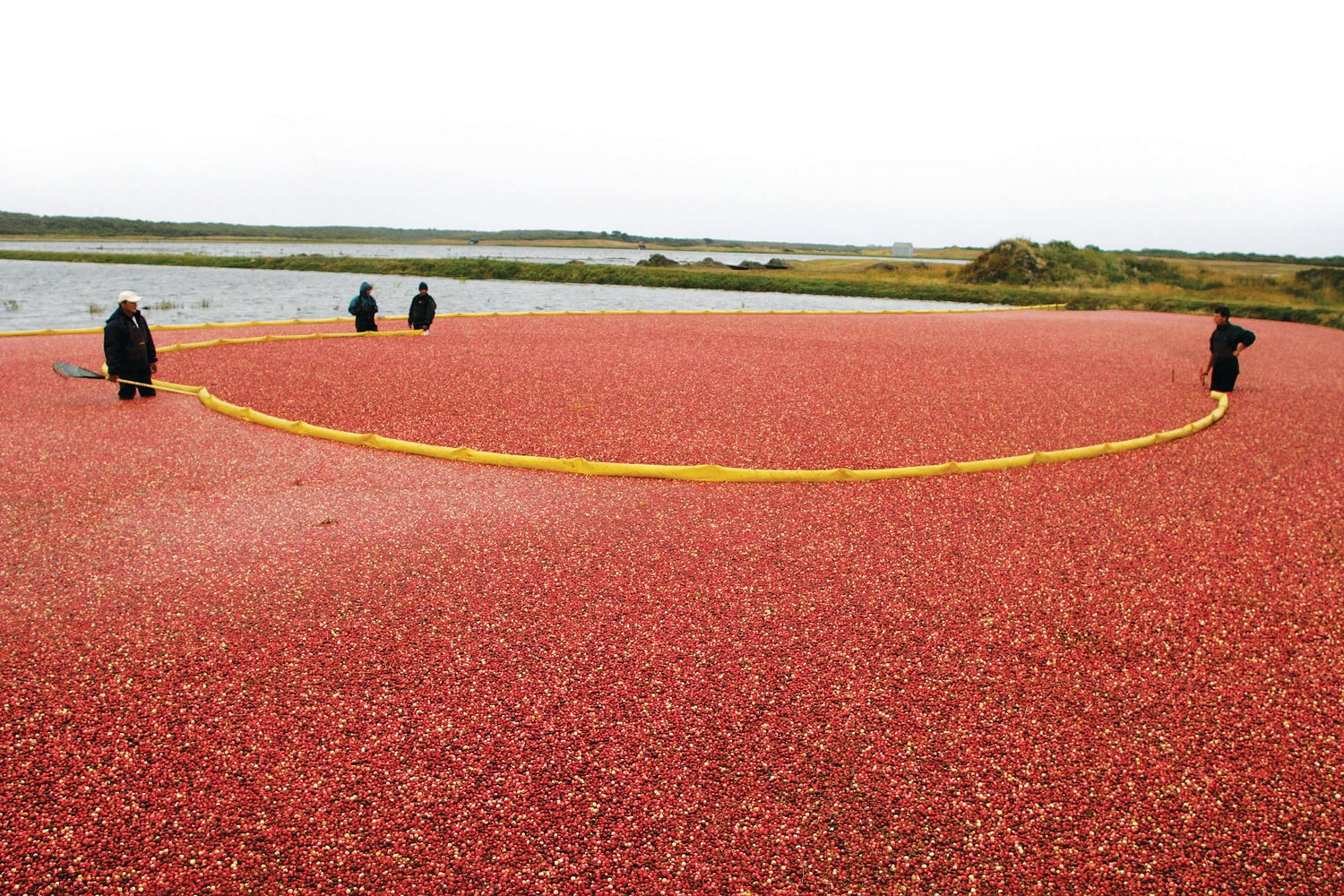 The first shots of the Civil War had yet to be fired when the idea to cultivate island cranberries took on the mantle of a paying business. You could always find them growing wild. Wampanoags knew how to use them as food, medicine and for dyeing cloth. They were called ibimi, which translates to bitter berry. Legend has it that cranberries were part of the thanksgiving feast in 1621.

The first Englishmen to arrive on Cape Cod called them craneberries, because they were reminded of the sandhill crane by the plant’s pink flowers.

A story in the Aug. 22, 1908 issue of The Inquirer and Mirror says that when cranberry cultivation began in 1857 it was “a time when the whaling industry was beginning to decline. The earliest records of the bog list many seafaring families turning to cranberry farming. Among them were Capt. John Gardner and Henry Coffin, descendants of the original settlers of the island.”

The cultivation efforts must have been working, because by 1859 the newspaper ran the following notice: “All persons, rich and poor, are requested not to take cranberries from any swamp where they have no interest, if they wish to avoid being prosecuted.”

The notice was signed, “Many owners.”

Eastman Johnson’s famous painting, “Cranberry Harvest on the Island of Nantucket,” was unveiled in 1880. It is, according to the Nantucket Historical Association, a romanticized rural scene of a fictional island location, showing approximately 50 men and women picking cranberries.

For all Johnson’s artistic leeway, that last part is accurate. Picking was done by groups, mostly girls and women in the early days, who filled casks that once were destined for the failing whaling industry. Dry picking was stoop labor, done on one’s hands and knees.

Much of the second wave of the island’s Cape Verdean community – the first wave was men who came to the island on whaling ships – arrived to work the bogs, some brought over from New Bedford by the Burgess Cranberry Company.

The company had purchased a huge bog near Gibbs Pond in 1906. Company owners said the business was named after an islander named Richard Burgess, “as a tribute to his perseverance in calling attention to the cranberry growing prospects of Nantucket.”

The newspaper mentioned that “fire had been burning over the area for two years, which turned out to be a blessing in disguise since it cleaned out the swamp, which had been lying fallow.”

“The Burgess Cranberry Company on Thursday commenced harvesting from its new bog at Gibbs Swamp, which has been in the course of construction for several years, and which when fully completed a few years hence will be the largest bog in the world,” said the newspaper story.

The company estimated that the harvest in 1908 would be about 800 barrels, but predicted that in 1909 the field would be at least 2,500 barrels.

The newspaper backed the company editorially.

“The people of Nantucket and those interested in the welfare and prosperity of the community should be glad to welcome this new enterprise, and be willing to aid it in every possible way. It will furnish employment for men, women and children, as a whole family can be employed in picking.”

Whoever it was named for, whatever the harvest predictions were, and regardless of the newspaper’s editorial support, the company only lasted three years.

It was sold to Franklin E. Smith in 1911. Fast-forward to 1959. The bogs that promised so much in 1909 had now been mostly worked out. Six islanders – Richard Corkish, Franklin Bartlett, J. Gordon McDonald, Albert Sylva, Robert D. Congdon and Albert F. Egan Jr. – bought the bog under their business name, Nantucket Cranberries Inc.

In the first year they owned it, the bog produced 800 barrels. The new owners brought new technology with them. Dry picking by hand gave way to machines and wet picking, the bogs flooded so the red berries would float to the surface.

Twenty bee hives were brought in, with 10,000 bees to each hive, and placed at strategic points along the bog. The bees helped pollinate the vines and made cranberry honey.

A 16-year-old kid named Tom Larrabee began working in the bog in 1950. Over the next half a century he worked and managed the bog. He was in many ways the memory of the cranberry bogs. He knew Roy Larsen when the former vice chairman of Time Inc. joined Walter Beinecke and Arthur Dean to purchase the assets of Nantucket Cranberries Inc.

The purchase, in 1968, put the Milestone Cranberry Bog’s 1,000 acres into the land holdings of a newly-minted nonprofit, the Nantucket Conservation Foundation. In 1980, they purchased the 39-acre Windswept Bog on Polpis Road.

By 1979, Tom Larrabee Sr. had taken over as bog manager for the Conservation Foundation. His son, Tom Jr., returned home in 2003, at his father’s request, to learn the art of cultivating and harvesting cranberries.

In 2018, the bogs were certified organic through Baystate Organic Certifiers, a USDA accredited certifying agent. It was the result of a three-year transition from traditional fertilizers and pesticides to organic alternatives.

The next year, the cranberry operation on the Windswept Bog was shut down. The property the bog sits on includes 111 acres of natural wetlands.

That decision, according to the Conservation Foundation’s website, was based on both economic and climate-change-related challenges, as well as concerns about water quality and nutrient loading in Polpis and Nantucket Harbor. Nutrient loading in the harbors has been a factor in the decline of bay scallops.

Tom Larrabee Sr. died after an accident in 2016, while looking for arrowheads in Hummock Pond, which had recently been opened to the sea. He was 81.

The business of cranberries is on the wane, but the tradition of cranberries is still defined by family farming. Today, his grandson, Nick Larrabee, manages the cranberry operation at the Milestone Bog for the Conservation Foundation.