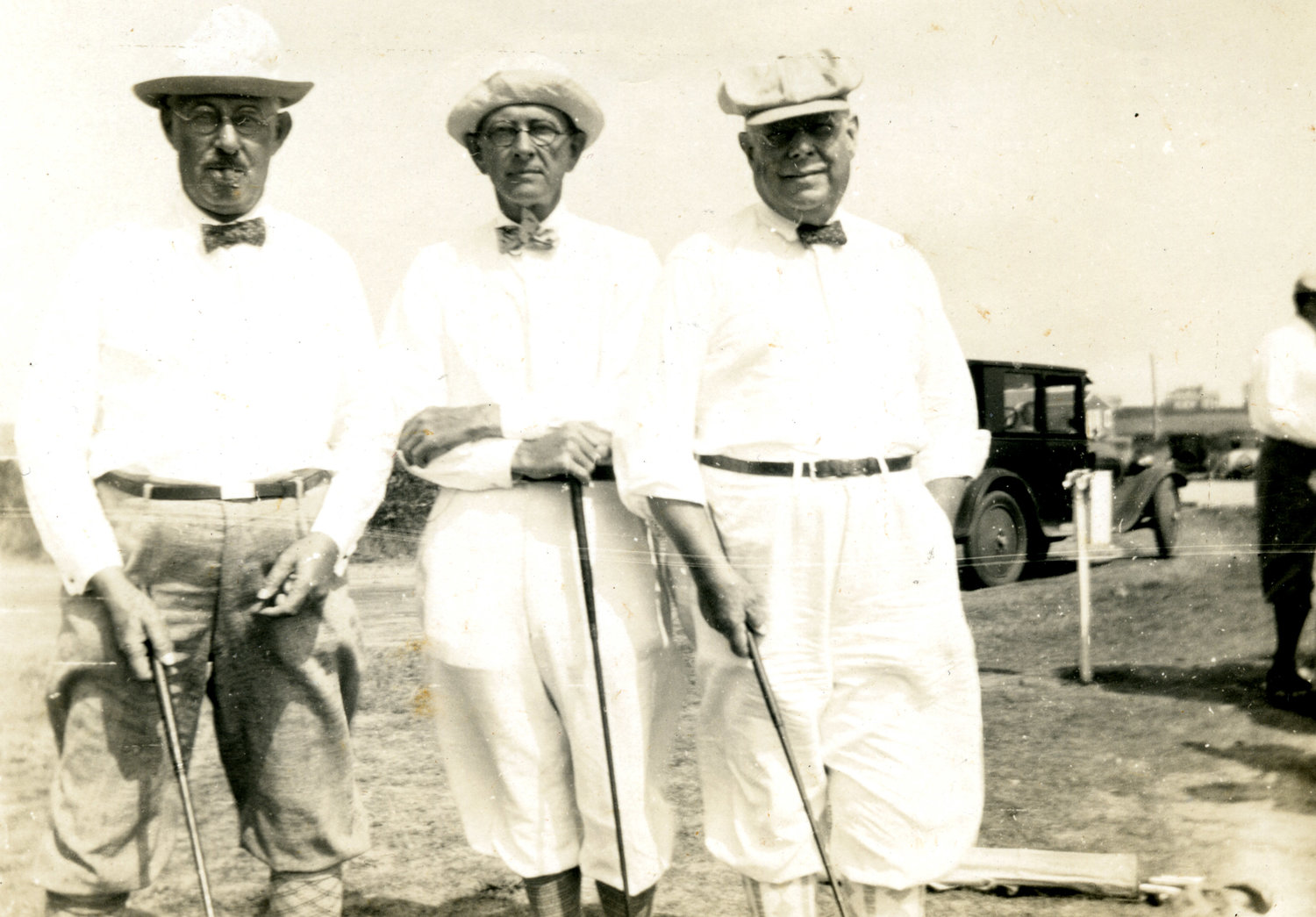 David Noyes decided that if he could not golf, he might no longer summer on Nantucket. This was the spring of 1897. Golf was a relatively young game in America. The first public golf courses had been established only a decade before.

It did not take long. By that summer, Noyes and fellow summer resident David Chase put out the word that they were looking to build a golf course on Cliff Road. A hundred people signed up immediately to be part of the yet unbuilt golf club.

It was called The Nantucket Golf Club, and was originally nine holes. Today it is called Tupancy Links, over 70 acres of open space owned by the Nantucket Conservation Foundation.

"The new club has about one hundred members, all of whom want to play, so that when the official games come on Saturday it is necessary to begin early in the morning and keep it up all day," J.C. Gamble wrote in “Historic Nantucket.” “A grounds crew of sheep and goats kept the fairways of the little course in playable condition.”

Pauline Mackay, who later went on to the United States Women's Championships, teed off on the course. A full-fledged clubhouse was constructed just two years later. The course was eventually expanded to 18 holes.

“The Nantucket Golf Club has become a lively fact,” wrote The Inquirer and Mirror in August 1897. “Before going further, let us state that the game should be pronounced as if it were spelt goff . . . When once the golf fever takes possession of one, it runs on no time limit, and there is nothing intermittent about it. Every Saturday afternoon refreshments are served under a tent, which attracts a large audience.”

Oswald Tupancy, a golf pro, bought the old course in 1949. He returned it to its original nine holes, but four years later closed the course down. People walking their dogs, or walking across the old links to look down at the ocean, have replaced golfers.

Less than a year after The Nantucket Golf Club opened, Sconset had its own golf course. The Siasconset Golf Club opened on land owned by Levi Coffin. These days it is informally known as Skinner’s, because Robert “Skinner” Coffin once was a co-owner.

“Golf has struck the town with a vengeance, and it would not be at all like Sconset if her golf club did not have some striking individuality or originality about it,” read a story in The Inquirer and Mirror in August 1898.

“Sconset Golf Moors will undoubtably be the designation of its links, which are completed and in daily use. The game is catching on in a fever heat, and threatens to take as deep a hold on the cottagers as base ball did a few years ago. The new golf club is a-coming, and will fill the need for outdoor sports.”

“Wednesday afternoon, eight players of the Nantucket Golf Club met a similar number of the Siasconset Golf Club in an 18-hole contest on the latter’s links,” read a story in The Inquirer and Mirror of Aug. 19, 1899. “The club-house in its commanding site, was decorated with bunting, while the afternoon sun brought out boldly the words, Siasconset Golf Moors.”

The newspaper estimated that 300 people were there to watch the match. The Sconset team won the day, 829 strokes to 838.

In the early 1920s, more than a few summer residents from Detroit had homes in Sconset. Millionaire David Gray, a former partner of Henry Ford, was one of them. He scouted the land where the Sankaty Head Golf Club now sits.

In 1924, architect Emerson Armstrong designed the course as a classic Scottish-style links course with the iconic backdrop of Sankaty Lighthouse.

“Characterized by rolling fairways, crater-like and sloped greens, the Sankaty Head course winds through the topography like a snake,” according to “Historic Nantucket.” “Its close proximity to the water often leaves players at the mercy of inshore winds.”

It also has the only remaining caddy camp in America.

“The caddy camp has become an institution at the Sankaty Head Golf Club, and is an asset to the community as well as the club,” wrote The Inquirer and Mirror in 1930. “The boys live in tents, with a main dining hall nearby, where strict army rules are in force, from the early morning in section of personnel and quarter, to the playing of ‘Taps’ at nine-thirty in the evening.”

The island’s public golf course, Miacomet, was built on land intended for dairy cows to graze. In 1956, Ralph Marble bought 400 acres to begin a dairy farm. Two years later, he decided it would be better served as a golf course. It opened in 1963.

A local golfing group, formed in 1946 and calling itself the Wesco Golf Club, who had once made Tupancy Links/Nantucket Golf Club their home course, was looking for another place to play after Tupancy closed. They found a new home at the new nine-hole Miacomet Golf Club.

Some things never change in golf. A report from a match in 1896 says, “Sands topped his drive, but he had the poor luck to go into the bunker. He was out in two, the first attempt being a failure. An approach shot that brought him over and into the winds followed. It took eight shots to make it to the hole.”