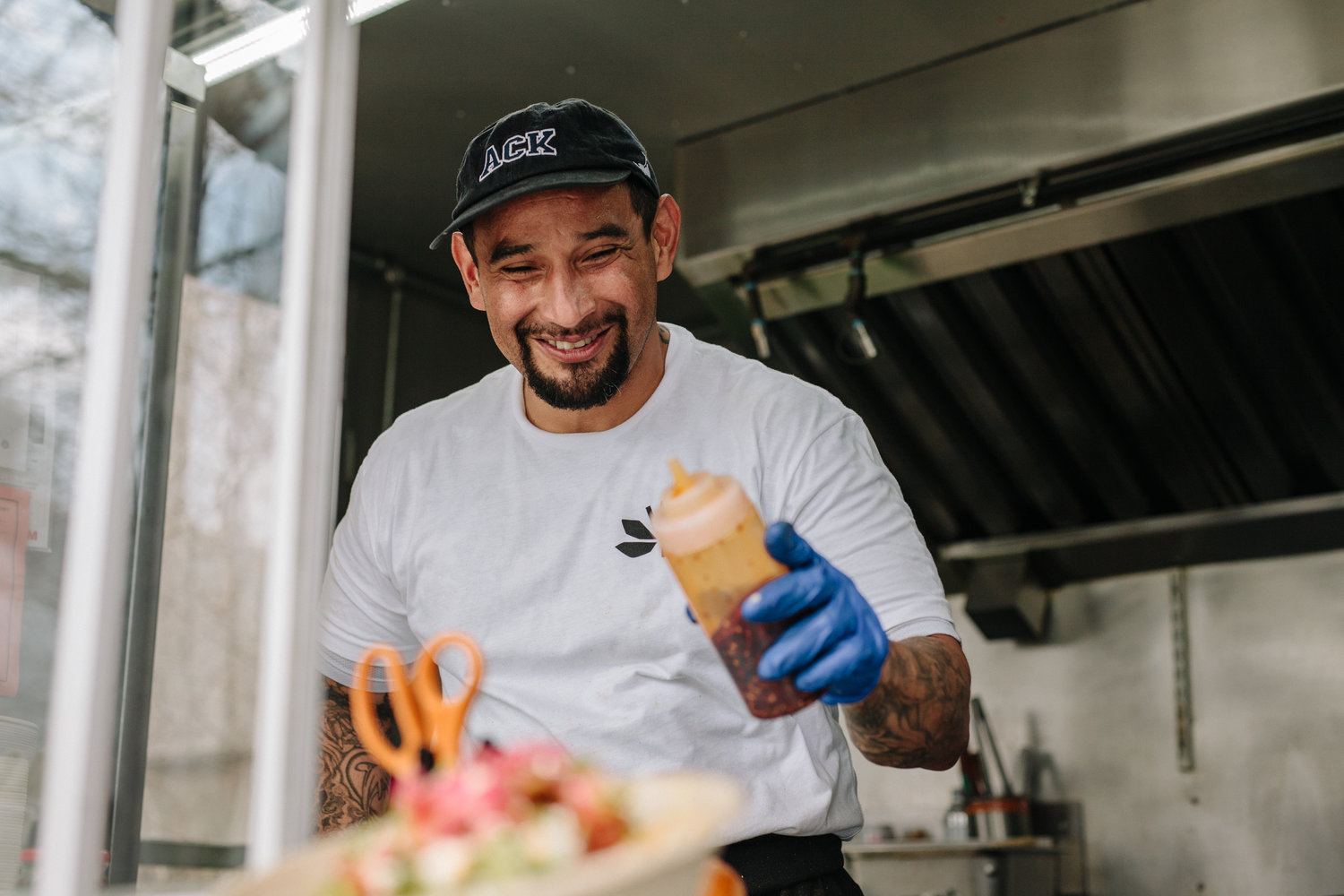 There’s a casual dining culture that’s been growing around the food trucks parked at Cisco Brewers and Cisco Beach for the past decade, that is unlike the culture you’ll find at any brick and mortar restaurant.

This isn’t formal affair. These are food trucks, plain and simple. But the food they make has taken off. This is food for self-proclaimed foodies. It’s also food for people who are just as happy to get their food handed to them from the back of a truck as they are when they’re sitting at a four-top inside a restaurant.

“People can be just as excited going to a food truck to get a waffle as they are going to a three-Michelin star restaurant,” said Sean Durnin, who traded private catering for a mobile truck at Cisco Beach. “People pick up on it. It’s becoming a part of eating out. That’s the essence of it.”

The trucks come in all varieties, shapes and sizes, and are found across the island. You’ve got your taco truck and your sushi truck. You’ve got steamed dumplings, fried seafood, Mediterranean gyros, North Shore roast beef and a full raw bar.

If you’re at the brewery this summer, you’re bound to see a handful of them on any given day, and as far as the truck owners are concerned, these are some of the most coveted spots on island.

That’s not only because there’s a constant flow of semi-intoxicated hungry customers lining up for lunch after their second round of beers. There’s also a camaraderie that comes with the territory that doesn’t exist in the same way inside a restaurant kitchen.

“Being able not to overburden yourself and to be at the brewery selling dumplings to people you know is what it’s about,” said Mirabai Perfas, who’s been selling dumplings from the back of a trailer for the past eight years, under the name Big Hug Dumplings.

Inside the truck, you’re exposed. The kitchen encompasses everything that can fit in the back of a 16-foot truck or inside a significantly smaller trailer hitched on the back of a pick-up. The front of the house and the back of the house are merged into one space. Here, you’re not only cooking, you’re also interacting with customers, taking orders, making small talk, and, chances are you’re also trading a scallop roll for truffle fries from another truck.

“You’re not at the restaurant, you’re outside,” Barry Bryant, the manager at the Lobster Trap food truck, said. “There’s a camaraderie around being at the brewery. Here we’re doing everything together versus the restaurant where you have a bigger squad.”

The food truck scene has exploded around the country over the past decade. It’s been the same story on Nantucket.

In the past five years alone, the number of trucks on the island has increased, from just a handful to a dozen. That includes the trucks that set up outside the brewery and the beach, as well as trucks that do private catering events exclusively, trucks like the Island Kitchen trucks.

According to town bylaws, food trucks must check off a few boxes before they’re ready to hit the road. They need a place to park overnight. They need a kitchen approved by the Board of Health for food prep, and they need a place to serve food. Those places must be at least 500 feet from a brick-and-mortar restaurant.

The trucks generally fall into two camps: trucks that have a restaurant tied to them, and trucks that have no such affiliation. In the past three years, The Lemon Press, The Green and a new downtown taco joint called NanTaco have all opened their own trucks, joining a list that includes The Lobster Trap and 167 Raw. Trucks without restaurants include Dylan Wallace’s Eat Fire Farm Pizza, Big Hug Dumplings and Nantucket Beach Dogs.

“We get applications for this constantly,” Amy Baxter, the town’s licensing administrator, said. “Everybody thinks it’s a great idea. Everyone and their brother wants one.”

TJ Fossa is one of those people. He set up his truck, Yezzi’s Nantucket, in front of the Richmond Great Point housing development on Old South Road last July, and reopened it in April.

He retrofitted what had been a wedding trolley in New Jersey into his own kitchen, where he serves North Shore style roast beef sandwiches, Italian subs, fried chicken and fries. His decision to go the food truck route came down to a simple financial equation.

“I was going to open a brick and mortar on the North Shore but it’s cost prohibitive,” Fossa said. “I decided to go with the food truck instead. I have the option to shut down if I need to. I have the option to do catering. It doesn’t matter that it’s a truck, it’s been my dream to have a roast beef shop and here it is.”

But food trucks aren’t cheap. The Pennsylvania-based custom food truck company Superior Food Trucks lists their trucks from $120,000-$300,000. That price includes a flat top stove, fryer, four-burner range, prep table, refrigerator and freezer, with a customized design pained on the side of the truck.

Trucks compete for places to serve lunch and for private clients for weddings, parties and work events.

But other than the fact that the entire operation is on a 12-16-foot vehicle, the process inside is more or less the same as it is inside a brick-and-mortar restaurant. At its core, you’re still cooking and serving food. The difference is the intimacy of the space itself.

“Like a kitchen, it can be overwhelming with people right there in front of you,” Larry Ramirez, a chef on the Lemon Press food truck, said. “You can see their faces, their expressions. It motivates you to do better. It makes it easier when you know the people.”

“Cooking is my dream. For a chef it’s motivation. You can never perfect food but you can try.”

In a way, the trucks work like a shopping mall food court.

There are three trucks at the brewery when Ramirez serves up a Middle Eastern style chicken shawarma wrap. The Lobster Trap, one of the original Nantucket trucks, features classic dishes like the bacon-wrapped scallops and lobster rolls you can also find at their restaurant downtown, in addition to some things you’ll only see on the truck, like mac and cheese egg rolls and tuna sliders.

Just a few feet away, Dylan Wallace is cooking pizza out of a brick oven that he carts to the brewery. Big Hug Dumplings has edamame, in addition to steamed pork and veggie dumplings.

Anyone there will tell you it’s the food that comes first.

“My two tenets were to create a healthy offering at the brewery because at the time there wasn’t much, and the other side was to support local farms and use as many local vegetables as possible,” Perfas said. “The challenge is incorporating as many vegetables as possible. In my first year, people wanted meatballs and I had to tell them that’s not what this place is about.”

“It’s got to be fun but it’s got to be good,” Durnin said. “It’s not about me. It’s not about Sushi Sean. It’s about the food and it has to be the best you can do. It compliments a bigger experience you have on the beach, or wherever the food truck is.”