Fishing on the Edge of the World 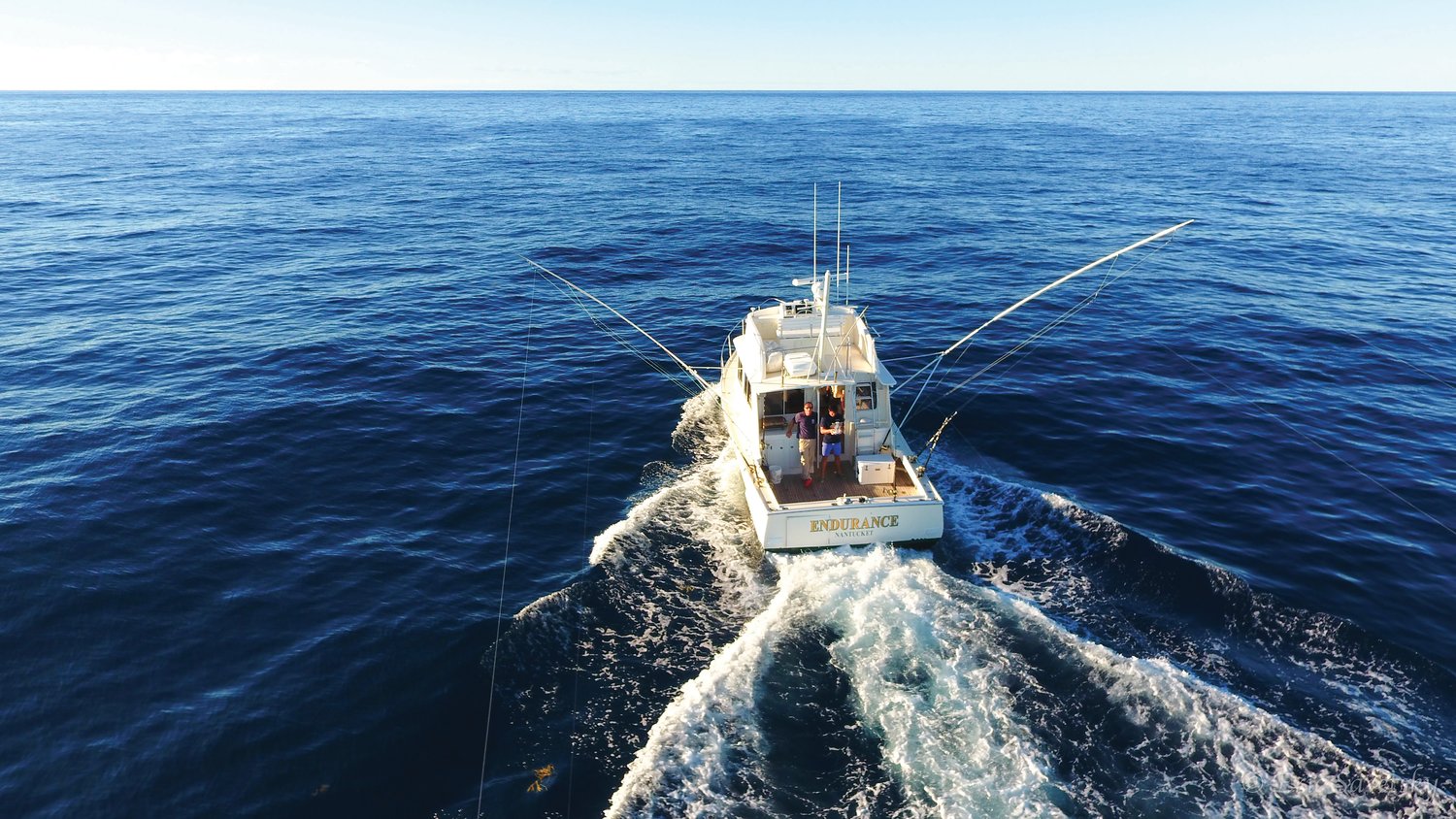 One hundred miles south of Nantucket lies another world. A vast expanse of blue, brimming with life. The last great adventure. For some islanders it can feel like one of the only ways in this world to connect with the past. In an ever-changing oceanic landscape, the canyons off the continental shelf seem almost frozen in time.

“You feel like you’re all by yourself. I’ve fished out there and not seen a boat all day. But it’s kind of cool when you are up in the tower and you just see all that blue water. It’s just beautiful. It’s another world,” Jim Briard said.

Briard, an islander in his 60s, said he can feel the salt water in his veins, passed down from generation to generation. He has been fishing the waters around Nantucket since he was a young boy and learned the ins and outs from his father, who had a charter-fishing business. He has been fishing out in the canyons since the 1980s.

The draw is a wildly diverse ecosystem. It’s the perfect confluence of warmer currents from the Gulf Stream coming up from the south, cooler currents coming down from Nova Scotia and the Gulf of Maine and the physical structure of the Continental Shelf that promotes such abundance.

“You get this incredible environment where it all kind of comes together and as a result it builds the food chain. You start off with all the plankton and it goes from there all the way up to the blue Marlin and the whales. That’s why they are all there,” said Sean Perry, an island fisherman who studied marine biology at UMass Dartmouth.

Perry frequents the canyons more than most, drawn to the prolific yellowfin tuna fishery. He calls it a world removed from humans. In his eyes, that is one of the things that makes it fun.

“Just think, 12,000 years ago you could walk out there. Sand flats, fields, marsh. That’s what it was. It wasn’t underwater,” Perry remarked as we looked over a map of the ocean floor.

He explained how the canyons were created from river-runoff erosion from the last ice age. Every canyon is essentially an ancient riverbed. The Hudson Canyon is the best example. He pointed to the map and followed the route from the canyon up through Ambrose Inlet all the way up the Hudson River. But that isn’t the canyon he fishes. Most boats coming out of Nantucket fish Atlantis, Veatch or Hydrographer canyons.

He will be the first to tell you that if you aren’t a little apprehensive you probably shouldn’t be out there. And you definitely shouldn’t stay the night. It takes a skilled mariner to make the five-hour trip out to the canyons. You have to keep your head on a swivel. Weather forecasts, medical kits, and mechanical checks are all extremely important. You are essentially on your own, and if things go wrong you need to be prepared.

“If you are going to do a reach trip you’ll leave the night before and you go at eight knots and burn two gallons an hour, so that you know at any point in the trip, if you need to steam home at full speed you want to be able to. Because if something goes wrong and you have to get somebody off the boat, the fastest thing you can do is get it back to the island. The Coast Guard won’t get a helicopter there any faster than you can get back,” Perry said.

As night falls you are cloaked in darkness, illuminated only by the lights from the boat and the stars above.

“It’s dark. I mean it’s like you look up and think you could reach up and touch a star. It’s unbelievable. I try to explain it to people. I say, you gotta be there to see how it’s like, especially when it’s as calm as this table,” Briard said as he ran his hand across the table between us.

Nighttime is when most people are fishing for swordfish. Sudden noises, like a splash or the sound of something brushing up against the boat, can quickly make your imagination run wild. Perry said there have been times where startled snake mackerel have jumped into the boat. For those who aren’t familiar with snake mackerel, imagine an eel with fangs.

Eric Savetsky likes to hang lights in the water to attract fish and give him and his crew a little entertainment. He said he has seen everything from whale sharks nuzzling the boat, to curious dolphins jumping eight feet out of the water to catch a glimpse of the crew, and even big mako sharks exploding out of the water, splashing the boat as they land.

Savetsky has been fishing the canyons since 1998. A self-described fish nut ever since he was a boy, he was first drawn to the canyons because of all the different species to pursue.

“You could catch four different kinds of tuna, two different kinds of marlin, you could catch wahoo, mahi mahi, you just don’t even know. That’s part of the excitement, too, all the different species out there. After doing that for 15 years I started to get really interested in seeing the stuff and jumping in with it. That has progressed to be my almost preferred activity out there. To go out there and see what I can swim with,” he said.

Savetsky has even done some work with the Woods Hole Oceanographic Institute, on Cape Cod. Last summer he and his crew attached five satellite tags to whale sharks and got three returns from the Caribbean and the north side of South America.

Briard laughed when I asked him if he would ever jump overboard to swim with the giants out in the canyons. He quickly replied, “no.”

“Eric will bring out a spotter plane to spot whale sharks. Here comes Eric and all of the sudden you hear, ‘he is jumping over.’ God bless him. Cause I know what lives underneath that ocean and I’m not doing it.”

When I asked Savetsky if he was nervous about swimming with sharks, he said no. The most dangerous thing in his mind are the giant cargo ships. Perry and Briard agree.

“The guys driving the tankers, they don’t give way, they don’t pick up their radio, they don’t care what you are doing. They are on course and if they have a conversation with you, because of the size of boat they are, they have to record everything and do paperwork. The most dangerous thing out there is a boat that is five hundred meters long and a hundred meters wide coming through,” Perry said.

All three of them talk about the comradery out there. It’s important to make connections with other boats when you are 100 miles offshore. You never know what could go wrong.

“From the moment we leave to the moment we sort of round the point and get close to the island you kind of forget about everything else. It’s just amazing how you just are absorbed in the mission, the adventure,” Savetsky said with a smile.