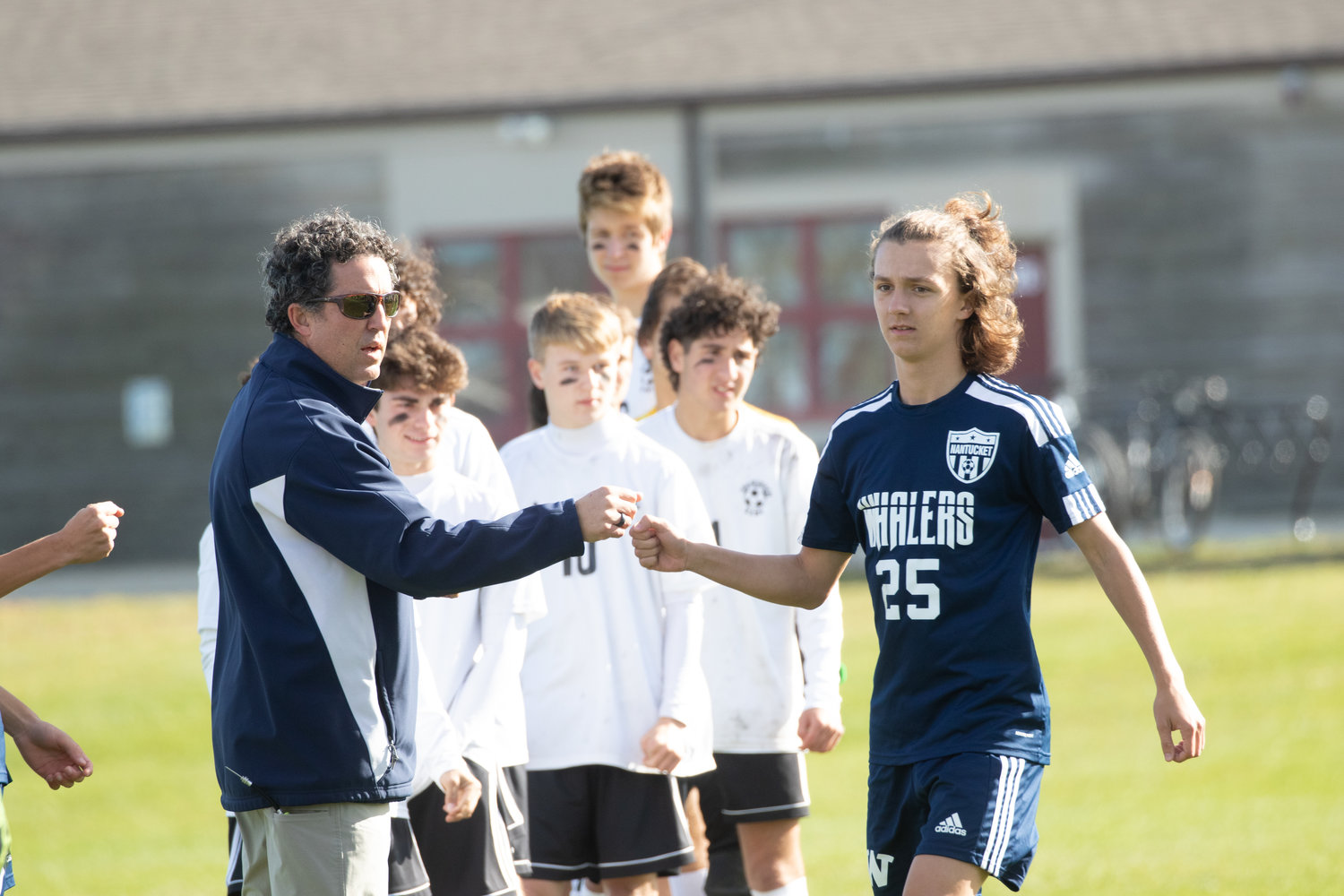 It was the early 1990s and Whalers football was king. Randy Hudson was the coach of the high school’s first varsity soccer team. Not everybody was a supporter. Hudson remembers the environment as “less than hospitable.”

He recalls the high school hosting a pep rally in advance of the football team’s matchup against Martha’s Vineyard around 1994. The soccer program had not yet joined the varsity ranks and was set to battle the Vineyarders in a junior varsity game the same day as the football team.

“Vito (Capizzo), the football coach and athletic director, went up and made a speech in front of the school and secondhand mentioned the Commie round ball team is also playing,” Hudson said.

The soccer team would soon become a varsity program. It is now on relatively even footing with football, thanks to a focus on the development of young players and an explosion of international families flocking to the island.

Following Hudson’s stint as coach, Rich Brannigan took over the team in 2001. He had been assistant coach under Jay Harman. He also volunteered for the Nantucket Youth Soccer Club and eventually served as the executive director of that organization for about 20 years.

In the beginning, the question was how do you teach a sport to a bunch of young kids, so that you plant the seeds of a winning varsity program?

Brannigan said he and other board members focused on creating a pyramid-shaped system that allowed the youth club to essentially act as a feeder system for the middle school, junior varsity and then the varsity teams.

“The idea is you have lots of little kids playing soccer, having fun, nobody’s worried about wins and losses and everyone scores goals. As you’re working your way up the ladder, and this is a process obviously that could take decades of time, eventually the system ends up building on itself,” Brannigan said.

“The whole idea was trying to build a symbiotic relationship, being able to communicate ideas, storylines and excitement from the top-most players, those seniors and juniors in high school, all the way down to the littlest kids, those 4- and 5-year-olds.”

At the youth level, the key is to introduce players to all the positions on the field and not pigeonhole anyone into a particular role, Brannigan said. By introducing the basic concepts of the game at an early age, Brannigan is able to teach players more complex styles of play when they get to the varsity level.

“Just because someone likes to be goalie as an 8-year-old, we don’t want them to stand in goal all game, every game, for the next six years. Learn what it takes to be a defender, learn what it takes to play midfielder or striker, and teach them the foundational concepts of the positions on the field,” Brannigan said.

At the same time Brannigan and others were building up the youth program, changing demographics on the island brought more and more immigrants to Nantucket who had a natural proclivity for soccer. While Americans grow up exposed to a broad base of sports, many of the Jamaicans, Hondurans, Brazilians, Europeans and other immigrant children grew up with soccer as their only sport and a central part of their culture.

“You’re constantly melding all of these different cultures together. These two kids see soccer this way and these two kids grew up in this way and they’re totally polar opposites. So how do you bring them all together? That’s one of the most enjoyable things for me as a coach, trying to find a way to blend all these cultures and blend all these ideas,” Brannigan said.

The first way to bring everyone together is through communication, which is not always easy when not every player speaks English. Sometimes, one of the more bilingual students will act as a translator, and Brannigan also will use a whiteboard to draw up plays. Soccer also has a number system for each position on the field that had become outdated but is starting to be reintroduced and offers a basic outline for each role on the field.

“Soccer has enough universal signs and universal words and ideas that when you strip down everyone’s cultural influences, you can communicate in ways that never seem to inhibit our team’s growth,” Brannigan said.

The first nationality to have an impact on the team was a group of Jamaicans in the late 1990s, Brannigan said. Soon after, El Salvadorans, Eastern Europeans and Brazilians joined them in making their impact on the program. Brazilian players had a very strong influence on the program before many of the families left Nantucket following the global recession of 2008.

The most successful Brazilian import to join the soccer program was Caio Canedo Correa, who set goals and assists school records during his freshman and sophomore years on Nantucket before returning to his native Brazil to pursue a professional career.

Correa has since played professionally in Brazil and the United Arab Emirates and has made numerous appearances for the UAE national team since acquiring Emirati citizenship in 2020.

In the early years the soccer program’s diversity was less based on ethnicity and more on gender. At that time, there was no separate girls soccer program, so boys and girls played together on one team.

Those teams featured several talented girls who would go on to play in college, like Nichole Marks, who attended prep school before playing collegiately at Hobart William Smith, Hudson said. At the time, he would make use of the island’s growing international population for practice purposes.

“I would put together these incredible teams of Jamaican, Irish, Dutch, English footballers who would come out and play against my kids and school them. But I think it really was great for them because without having someone to emulate it’s tough to get really good and they could see from these people how good they could be so it was awesome,” Hudson said.

Despite the early opposition from some Nantucketers who viewed soccer as a threat to the island’s football tradition, it is now here to stay and has played an important role providing a sense of community for immigrant families coming to the country.

“There’s never an issue where two kids from two different soccer cultures totally clash and end up destroying the vibe of the team. It’s always turned out positive and these kids from different countries and different cultures end up becoming great friends and great classmates,” Brannigan said.