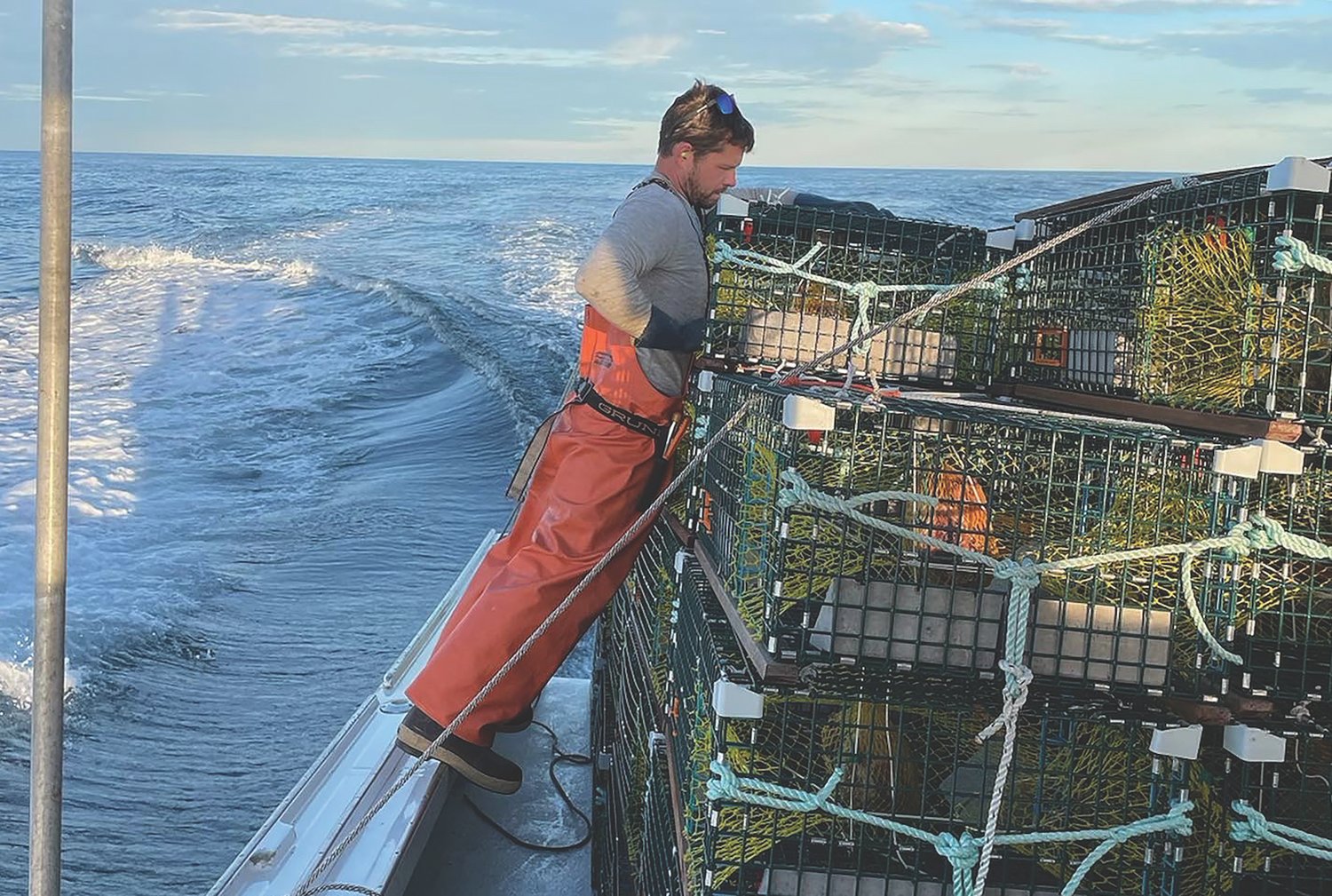 Jim Sjolund on his lobster boat.
Courtesy of Jim Sjolund 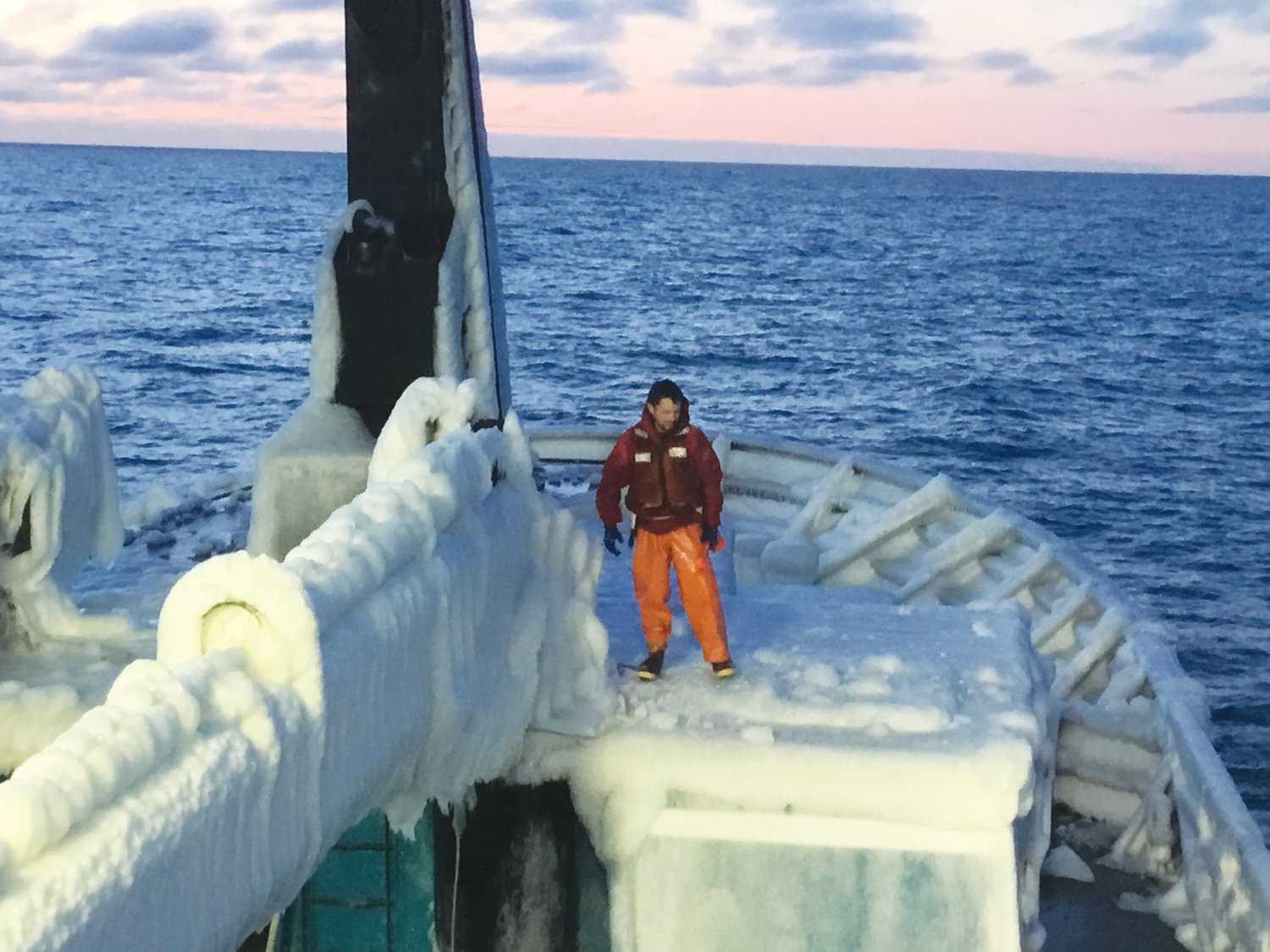 Northern Leader is a 184-foot fishing boat built for longlining cod in the rough waters of the Bering Sea, where 40 knots of wind and 20-foot seas are not uncommon. The boat is state-of-the-art and cost $37 million to build.

Regardless of the cost or the state-of-the-art gear, working on a boat like this still comes down to long, dangerous days and nights of getting banged around on the deck as you bait hooks and pull cod from the ocean. Imagine a scene from some cable television show where a crew is trying to work in icy conditions, while sprays of frozen ocean repeatedly shower the deck and you can begin to imagine the work.

“I wasn’t quite prepared for how hard they work,” Jim Sjolund said about his first fishing trip in Alaska. “I slept for three days when I got home.”

He is 34 years-old now, but on that first trip he was 25.  An island kid who attended the Massachusetts Maritime Academy after high school, he had worked on tugboats and tankers. Now he was fishing on a ship that sets 72,000 hooks on 45 miles of line.

“Everything you do is physical,” he said. “You do 17 ½ or 18-hour shifts. You do it every single day. No weekends off. It takes six hours to set all the gear out. It can be blowing 40, but you are still setting gear out.”

Sjolund worked his way up – deckhand, assistant engineer, assistant mate, first mate – storing away all the experience and knowledge of how things work on the boat, how fishing is done, all of those things you can only really learn out on the waters off Dutch Harbor, Alaska. It seems cliché to say that nothing replaces experience, but the 25-man crew of one of these boats counts on the experience of their captain.

Bering Leader is a 124-foot version of its sister ship, both owned by Alaska Leader Seafood. The company had pulled it off the water in 2019, when fish federal fish quotas went down. The company decided it could meet the quota using only the bigger new boat. It had just been sitting in a harbor for three years when quotas went back up. There was now the opportunity to catch more fish.

The company decided to offer their young mate the chance to be captain. First, he had to get it out of the shipyard and make it ready to fish.

“It had been just sitting for three years, and so everything was crusty,” Sjolund said, smiling at the memory of the mess the ship was in, and how his quiet confidence and experience on the water meant he was up to the task. “Everything needed work. Everything was trashed.”

The problem was Sjolund had never been on this boat before. He had to figure out while he worked on it, exactly how it all went together. He made modifications, working with engineers and electricians and welders. When the company overseeing the fabrication on the boat got behind in their work, he jumped in to help do some of the welding. He arrived at the shipyard the first week of April, and by the first week of June, with work still being done up to the last minute, the boat was ready to fish again.

Then two key crew members, an experienced engineer and an experienced mate, dropped out. Bering Leader steamed way from the shipyard, with Sjolund at the helm, a mate who had never been fishing, and ten brand new deck hands.

“The hardest part in the boat in Alaska can sometimes be the 25 crew members. That’s a lot of people to manage, and there’s always something coming up. You would never believe the things that come up.”

There are injuries not severe enough to require a Coast Guard helicopter, but bad enough so a man cannot work.

The night before the Bering Leader was to leave the dock in Seattle and steam into Dutch Harbor to fish, a deck hand fell and tore up his ankle.

“I go check it out and he is laying on the floor. He had destroyed his ankle. He was in so much pain that he could not deal with putting ice on it.”

Sjolund has some first aid training, and there is an on-call doctor the company hires who he can call on the phone.

“We’re at the dock, luckily,” he said. “He couldn’t walk. So, we put him in a sling we would use if he needed to be helicoptered off and used a crane to swing him down onto the dock. Put him in a truck and drove him to the hospital. Now it is  11 p.m. I told the mate he was just going to have to be on call if the hospital calls and says they’re releasing him. You gotta put him in a hotel. We can’t stop a multi-million-dollar fishing operation because one guy twisted his ankle.”

There are deck hands who thought they could do the work before the boat left the dock, but once out on the water decide they just can’t do it. There are deck hands with a drug problem who are detoxing. On one trip, when Sjolund was a mate, a crew member took a swing at the captain.

“He was freaking out. We had to zip-tie him,” he said. “You got 25 young guys on the crew and you should be able to take care of any problem. If you have 24 of them on your side, you’re fine.”

All of that before pulling a single cod out of the water.

“I enjoy fishing and the challenge of trying to do it,” he said.  Boats like these fish 20 fathoms to 60 fathoms deep. The fish on 2.3 miles of gear is weighed and logged, and becomes one of the factors a captain considers when looking for fish.

“People mention the fish finder and, yeah, you see stuff but you don’t know if what you are seeing is another kind of fish you’re not catching, or bait fish, or crabs,” he said. “You can’t set your gear off what you see on that screen. We always say the best sign is the sight of the hook coming up with a fish on it. That’s what matters. Doesn’t matter what the sounder says Are you catching them there or not?”

Fishing is a hard way to make a living.

“People don’t realize it doesn’t stop. You don’t go home and get to sleep in your own bed. No matter what is going on, you’re still out there.”

The Julie Alice is a 36-foot lobster boat. Sjolund launched it early this fall. The 140 lobster traps he sets represent the idea of fishing Nantucket waters, instead of the 100 miles of ocean bottom along the Aleutian Islands, and the idea of being able to sleep in his own bed after a day’s fishing.

“I’ll never own one of the boats I’ve been running,” Sjolund said. “It still feels good running a boat up there and catching fish. But when it’s your own, it’s a little different. And it’s also your home. Alaska’s not my home. I don’t want to live in Dutch Harbor.”

There are challenges to this kind of fishing as well. Federal regulations aimed at protecting Right Whales are the most recent knot to untie. Breakaway gear in case a whale gets tangled, sinking ground lines, and lines that require less buoys, are just the surface of the regulation problems facing lobstermen.

Even given the problems posed by regulations and fishing from Nantucket, with its lack of support services, Sjolund is optimistic about lobstering. Dan Pronk, who Sjolund has fished with, is the only other lobsterman on island.

“The reason I picked lobster is it’s a product that doesn’t have to be shipped off Nantucket,” he said. “In the summertime you could have five boats off Nantucket lobstering and they could sell them all on Nantucket. Sayles Seafood goes through a couple of hundred pounds a day when they do takeout, and that’s just one place. No reason you couldn’t sell all of it.”

Scallop boats are so small that they do not have names on their transoms, only registration numbers. Jim learned how to be on the water by growing up scalloping with his father, Carl. In fact, he comes by his urge to chase fish from both his father and his grandfather, Rolf, who fished off George’s Bank.

“We get guys who show up as crew. Almost none of those guys ever fished on a small boat at all,” he said. “They don’t have that base experience of ‘Here’s how you tie a line off,’ or ‘If this happened here’s what you can do.’ They haven’t learned how you fix a boat, work on it, secure it for weather, rig gear.”

It is an early learning curve shared by, say, the sons and daughters of Maine lobstermen. Sjolund said that those years as a boy, working on his dad’s scallop boat, gave him experience and knowledge that one cannot learn in the classroom of a maritime academy. It is a shared knowledge that will be lost, as small local fisheries fade away.

“When I was growing up, bay scalloping seemed a lot more fun. I always looked up to my dad for doing it and thought it was a cool way to be making a living,” he said. “I always liked being on the water. I always thought bay scalloping is great, and it will always be here.”

Father and son still go scalloping, whenever the son is back from codfishing off Alaska. Standing in his shanty a few years back, Carl Sjolund pointed out a framed photo of Northern Leader.  “That kid just can’t stop chasing fish,” he said.

Jim Sjolund said that he is saddened these days when he sees the decline of the harbor, and of the scallop industry.

“It is still here. But it’s hard to see how much less a fishery it is now than it was. The harbor health is a huge problem. In 2010, we saw a huge change. It was my first year out of college, and we went out fishing and I thought what is this stuff? All this black muck and algae in the dredges. This was in the harbor. That was really when it started to change. Every year it’s worse and worse. This summer I paddle boarded across the harbor, and the whole thing is just brown and black and killing the eel grass.”

“You always feel like there’s some hope, but to see it all going down this way, it’s a hard thing to be optimistic about. Even in Madaket the scallops are there, but tiny and the bottom looks terrible. It just doesn’t look clean and healthy like it used to.”

Carl Sjolund is right about his son. He cannot help chasing fish. He will soon be back in Dutch Harbor, captaining the Bering Leader and looking to fill it up with cod. Then he will be back on island, setting lobster traps or scalloping with his dad.

“I like to be on the water,” he said. “It can be difficult and you’re probably making less money than you could make doing other things, but there is nothing I’d rather be doing. It could be on any size boat. If I was making money in my dinghy getting eel out of Hummock Pond and making a living doing that, it’s cool.”