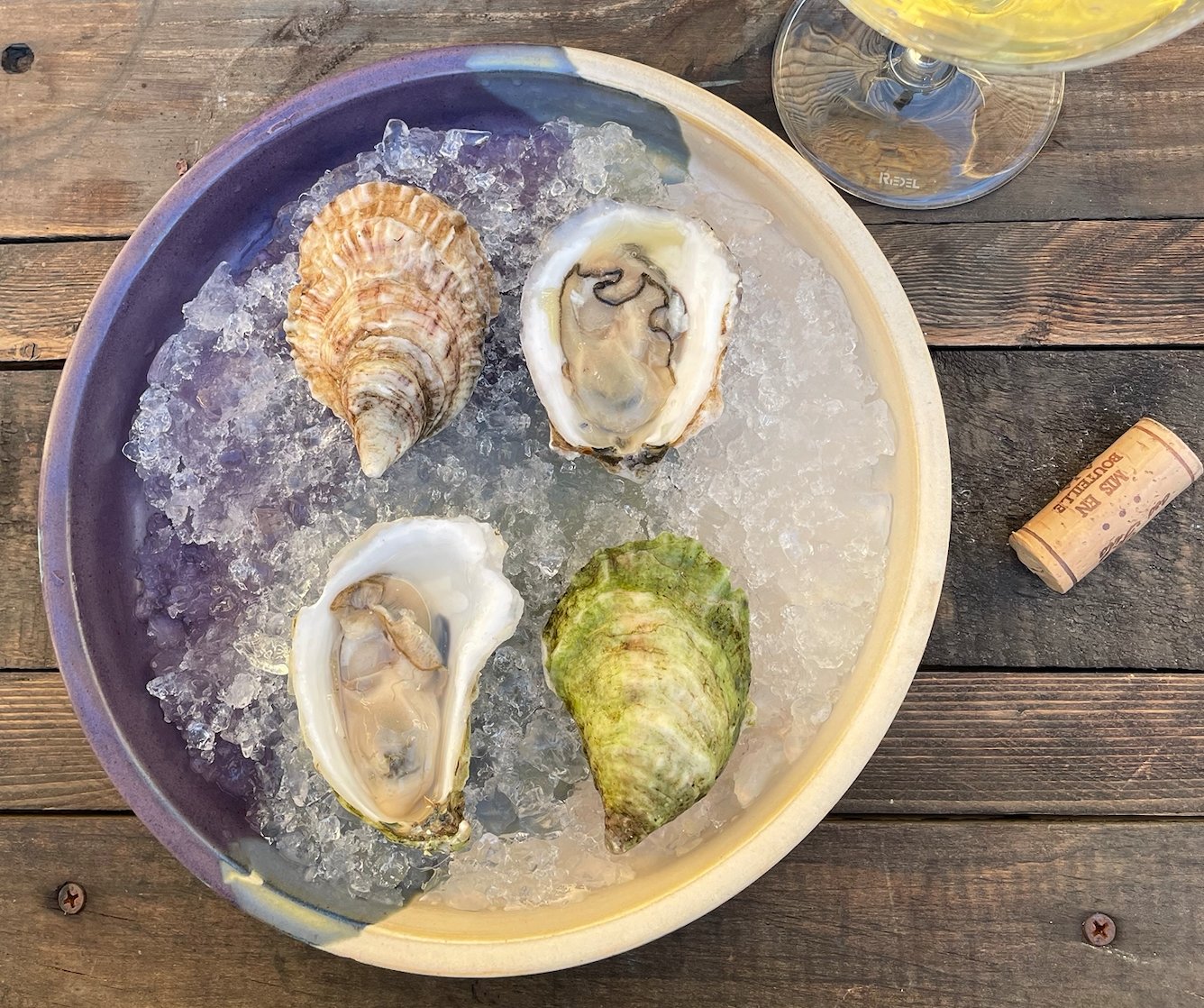 There is nothing new about oysters growing in Nantucket Harbor. Wild oysters along with other local shellfish were an important part of the diet of the indigenous Wampanoag Indians. Issues of The Inquirer and Mirror from the late 1800s contain ads touting “First-Class Polpis Harbor Oysters, either in the shell or opened.”

Although the fishery seems to take a back seat to the ever-popular bay scallop, over the last 10 years the Nantucket oyster has begun to take center stage. If you live here year-round or spend time here, learning how to shuck an oyster is an invaluable skill. There is nothing like sitting on your porch with friends enjoying a glass of wine and a nice, cold oyster.

Currently there are around five island oyster-growers. The most sought-after are Fifth Bend Oysters, grown by Simon Edwardes in the head of the harbor, and Pocomo Meadow Oysters, grown by Emil Bender and his father Steve, near the mouth of Polpis Harbor.

Pocomo Meadow was started by Steve Bender and his wife Ana, and the operation has since been spearheaded by their son Emil. The Benders grow their oysters in bags that sit on the harbor floor. The shells of their oysters have a wonderful green hue and while they still have that typical East Coast oyster brine, they also have a beautiful vegetal quality due in part to the fresh water flowing from estuaries into the harbor.

Fifth Bend oysters are grown in gear that floats on the top of the water. Edwardes’ oysters are crisp and clean with a typical East Coast brine, balanced by the sweet adductor muscle.

I was curious about the different flavor profiles in such a small harbor so I went to Glidden’s Island Seafood to procure some oysters. I chatted with owners Jeff Henderson and Joan Skarr. It is important to note that, like the bay scallop the adductor muscle of local oysters is sweet.

Glidden’s sells seafood wholesale to restaurants, as well as retail. When I asked Jeff how many oysters they go through a day, he looked down at a pile of papers on his desk and pulled up a slip from that day’s deliveries. They had gone through 6,300. In the busy summer months, he said they go through a consistent 5,000 a day, with a majority of those going to local restaurants.

Next, I went to talk with Alana Lucas of Nantucket Wine & Spirits to find some wine to pair with them. She pointed me in the direction of a Txakoli white from the Basque region of Spain and a Crémant de Loire rosé from France.